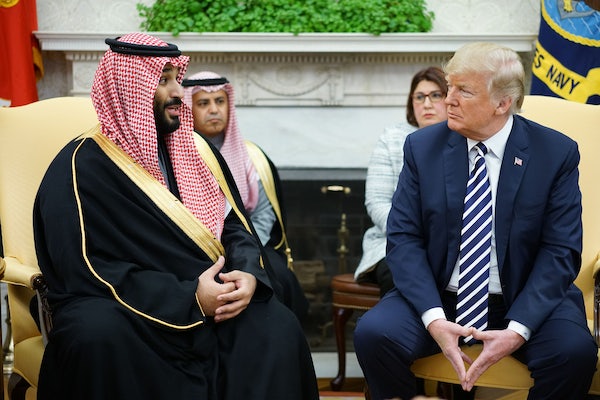 Donald Trump’s hotel business has gone through a complex shift since he became president. His hotel in downtown Washington, D.C. has been doing thriving business, with nations like Kuwait and the Philippines often booking rooms and events as a way to show friendship with the president. But in New York City, where Trump is politically unpopular and there are fewer occasions for booking political events, the president’s business has suffered. Both Trump’s hotel in SoHo and Trump International Hotel in Manhattan have seen declining use since Trump’s political ascendency. Last year, the SoHo hotel severed its connections with the Trump Organization.

But, as The Washington Post reports, Saudi Arabia’s Crown Prince Mohammed bin Salman has stepped in to help:

The general manager of the Trump International Hotel in Manhattan had a rare bit of good news to report to investors this spring: After two years of decline, revenue from room rentals went up 13 percent in the first three months of 2018.

What caused the uptick at President Trump’s flagship hotel in New York? One major factor: “a last-minute visit to New York by the Crown Prince of Saudi Arabia,” wrote general manager Prince A. Sanders in a May 15 letter, which was obtained by The Washington Post.

The Post notes that the habit of foreign governments enriching Trump’s coffers might open him up to legal trouble, especially with on-going lawsuits pursuing the claims that Trump is in violation of the Constitution’s emoluments clauses.

But surely the courts are not the only remedy that is available. In a functioning republic, Trump’s suspicious business deals would receive congressional oversight. So far, the Republican congress has been unwilling to inspect the matter. The situation could change after the mid-term elections.