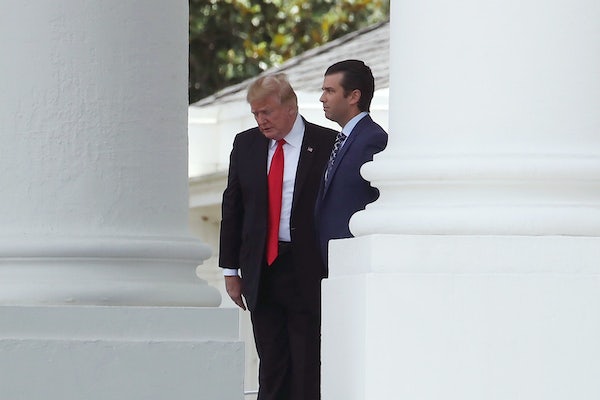 Trump admits his son met with Russians “to get information on an opponent.”

On Sunday morning, the president tweeted:

On the same morning as the new tweet, Jay Sekulow, one of the president’s lawyers, went on ABC News and retracted an earlier claim he made that the president had no role in the statement issued by Donald Trump Jr. “I had bad information at that time and made a mistake in my statement ... over time facts develop,” Sekulow said.

Sikulow’s statement, combined with the president’s tweets, creates an intriguing timeline of events:

1) On June 9, 2016, Donald Trump Jr. and other Trump campaign officials meet with a Russian group led by Natalia Veselnitskaya to get opposition research on Hillary Clinton.

2) On July 8, 2017, the president dictates a statement giving a false account of that meeting. His lawyer Jay Sikulow subsequently make the false statement that Trump had no role in dictating that false statement.

3) On August 5, 2018, Trump admits the meeting was about collecting opposition research and Sikulow admits Trump had a role in crafting the false statement.

If Robert Mueller wants to pursue an obstruction of justice charge against Trump and others in his White House, he has a lot of material to work with.