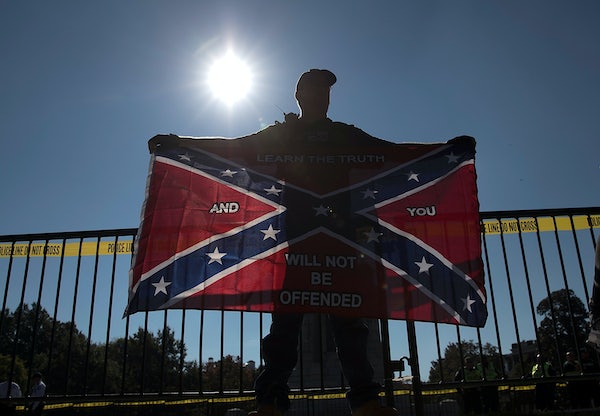 Stewart, who is running as the Republican gubernatorial candidate in Virginia, is well known for his support of Confederate Monuments, but a new CNN report reveals that his affinity for the old South is much deeper. At a campaign event in 2017, Stewart likened leaving the union in 1861 to the American Revolution.

‘I am from Virginia. I’m very, very proud of it,’” said Stewart, who was born in Minnesota. “It’s the state of the Declaration of Independence and the Constitution.”

Then he added: “But it’s also the state of Robert E. Lee, and Stonewall Jackson, and J.E.B. Stuart. Because, at the base of it, Virginians, we think for ourselves. And if the established order is wrong, we rebel. We did that in the Revolution, we did it in the Civil War, and we’re doing it today. We’re doing it today because they’re trying to rob us of everything that we hold dear: our history, our heritage, our culture.”

The event was organized by George Randall, who actually supports secession as a current policy. Randall once told The New York Times that “I’m a secessionist because the federal government is anti-Christian and we’re different culturally.” Stewart’s support of the Confederacy is expected to cause trouble not only for his campaign, but for other Republicans running in Virginia.