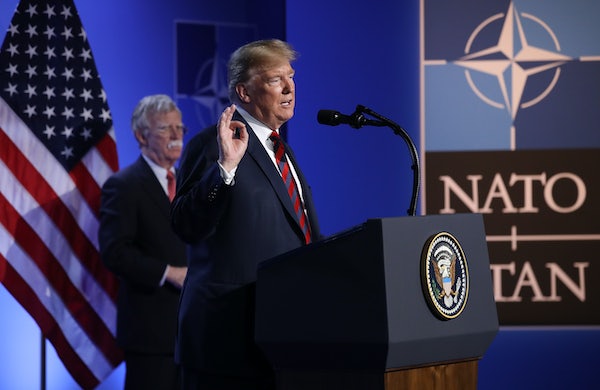 Trump’s staff tricked him into signing a pro-NATO agreement.

The New York Times has published a remarkable reconstruction of the July NATO meeting, the upshot of which is that the staff of President Donald Trump successfully conspired to get him to sign an agreement supporting the troubled alliance against his own policy preferences. The machinations, which were led by national security advisor John Bolton and Defense Secretary Jim Mattis, were done to avoid the fiasco of the June G-7 summit in Quebec, where the president ended up not signing the final communiqué.

As the Times notes, “In June, weeks before the meeting, Mr. Bolton sent his demand to Brussels through Kay Bailey Hutchison, the American ambassador to NATO. He wanted the NATO communiqué to be completed early, before the president left for Europe.”

The idea was to reach an agreement that was strongly pro-NATO,and could counteract the president’s tendency to criticize the alliance and to call for greater co-operation with Russia.

The final results certainly met that objective. As summed up by the Times:

Against Russian objections, the military alliance would formally invite Macedonia to join. It would establish an Atlantic Command post, hosted by the United States in Norfolk, Va., to coordinate a swift alliance response in the event of, for instance, a war in Europe between Russia and NATO allies.

And, most important, allies pledged to build up their militaries and provide 30 mechanized battalions, 30 air squadrons and 30 combat vessels, all ready to use in 30 days or less, by 2020 — a force to quickly respond to any attack on an alliance member.

Key to the success of the whole plot was that Trump would be kept in the dark about what he was actually signing. As the Times reports, “Mr. Trump was presented with only the broad outlines of what the meeting would deliver—not details of the document of 79 paragraphs, running 23 pages.”

The thinking behind this strange maneuver is that the document Trump signed would counteract his own words. “The new agreement has given American national security officials the ability to assure the public, and skittish allies, that the country’s commitment to the alliance remains intact—no matter any anti-NATO tweets or interviews or statements from Mr. Trump,” the Times claims.

It’s by no means clear that this manipulation of the president will in fact work. After all, if the president continues to deride NATO, as he has in interviews, why should anyone believe that in a crisis he’ll abide by words that he hasn’t even read?