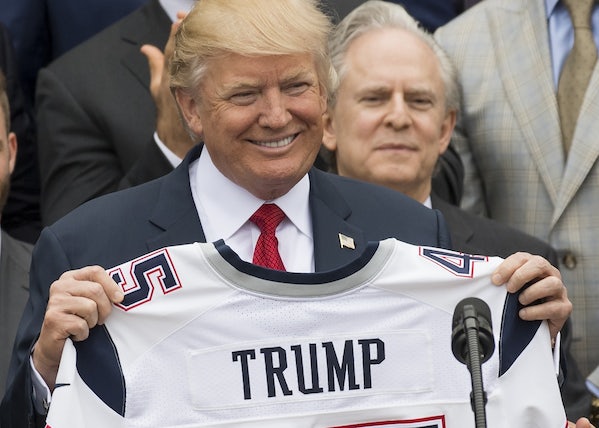 The National Football League kicked off its preseason in earnest last night, marking the imminent return of the nation’s most popular professional sport. This morning, President Donald Trump took the opportunity to revive his campaign against black players who protest racial injustice.

The president’s efforts have had some success over the past two years. Team owners voted this summer to bar players from kneeling during the national anthem, thus exposing protesting players and their teams to fines and other league sanctions. At last night’s games, two players on the Miami Dolphins knelt during the anthem anyways, and a smattering of other players across the league silently raised their fists.

The president’s attempt to intimidate players who demonstrate against racism and police brutality was already an abuse of his bully pulpit. But it’s even more repellent after Trump’s supine performance beside Russian President Vladimir Putin at the Helsinki summit earlier this summer. If kneeling during the national anthem to protest racial injustice is considered unacceptable, where does kowtowing to a foreign dictator who attacked the American democratic system fall?