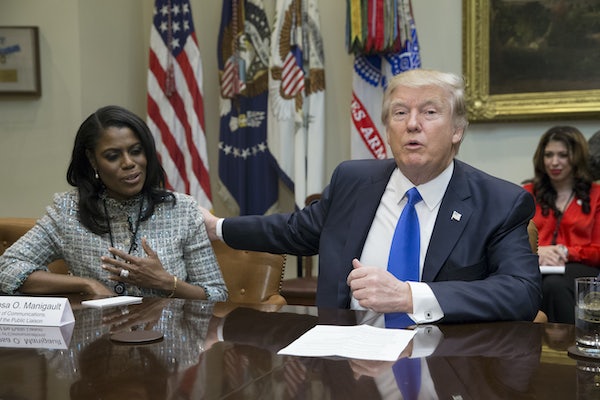 In his response to tape allegations, Trump remains the master of kettle logic.

On Monday night, the president continued his escalating rhetorical war with Omarosa Manigault Newman, his former aide. Among other accusations, Manigault Newman claims to have heard a recording of Trump using the n-word while on the set of The Apprentice. (Manigault Newman had previously said she only knew that the tape existed.) The tape is reputedly in the possession of Mark Burnett, the producer of the show. Manigault Newman hasn’t provided evidence for this claim and her statements have been inconsistent.

In response, the president tweeted:

If it’s difficult to follow the logic of these tweets, it’s because they don’t follow the rules of normal rationality. Rather, they are examples of what the philosopher Jacques Derrida called “kettle logic,” where inconsistent arguments are made to prove a point. Trump is a frequent user of “kettle logic.”

Derrida coined the phrase “kettle logic” from a story that the psychologist Sigmund Freud related in two of his books.

The story goes like this. A man is accused by his neighbor of returning a kettle in a broken condition. In response to the accusation he argues:

1. That he had returned the kettle undamaged.

2. That it was already damaged when he borrowed it.

3. That he had never borrowed it in the first place.

In the same way, Trump’s response to this controversy can be broken down into several parts:

2. Mark Burnett told Trump there is no tape of Trump using the n-word.

3. Manigault Newman can’t be trusted because she is “Wacky” and  “Deranged.”

4. The media didn’t listen to Manigault Newman when she praised Trump.

Point number 4 seems wholly irrelevant. It’s natural, for obvious reasons, for a former White House aide who is critical of a president she worked for to get a lot more media attention than a normal White House aide. The point is also in contradiction with 3 since if she is “Wacky” and “Deranged” the press should avoid her at all times.

Point number 1, if true, makes point 2 irrelevant and strange. After all, if Trump never used the n-word at all, he doesn’t need Mark Burnett to tell him no tape exits. Trump himself would know that no tape exists.

In sum, Trump is in the dream world of kettle logic, making whatever arguments he think will stick, no matter their internal coherence.