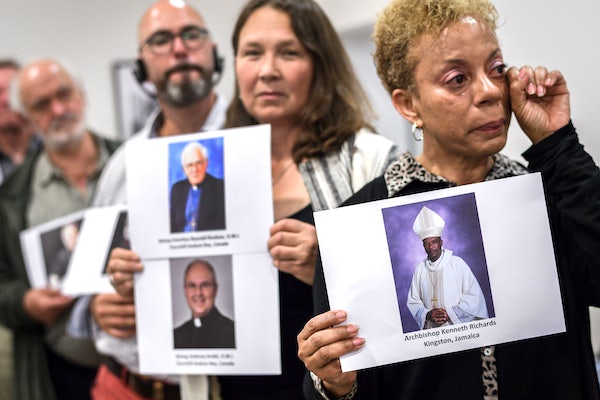 ‘It happened everywhere’: The unimaginable scale of sexual abuse in Pennsylvania’s Catholic Church.

“There have been other reports about child sexual abuse within the Catholic Church. But not on this scale. For many of us, those earlier stories happened someplace else, someplace away. Now we know the truth: it happened everywhere.” So begins the Pennsylvania Supreme Court’s grand jury investigation into clergy abuse, released to the public on Tuesday afternoon. The 900-page report, which investigated all but one of the state’s dioceses, identifies over 1,000 victims of child sexual abuse and over 300 predatory priests.

The report explains why abuse flourished for so long. “While each church district had its idiosyncrasies, the pattern was pretty much the same. The main thing was not to help children, but to avoid ‘scandal.’ That is not our word, but theirs; it appears over and over again in the documents we recovered,” the report asserts. Church officials kept complaints in a “secret archive,” to which only the bishop kept the key. The report also states that diocesan files repeatedly relied on euphemisms to describe clergy abuse; the files refer to rape as “inappropriate contact,” for example. Predatory priests were referred to treatment, and in the rare instance the church removed a priest from his parish, his congregants never learned the real reason for his departure.

The Catholic Church already reels from abuse scandals, some old and some more recent. The patterns documented by the Pennsylvania grand jury resemble previous abuse scandals, the most famous example being the Archdiocese of Boston’s cover-up of decades of child abuse. In July, Cardinal Theodore McCarrick resigned over revelations that he abused seminarians and at least one minor; on Tuesday, Crux, a Catholic news website, reported that Boston’s Cardinal Sean O’Malley had been informed of McCarrick’s abuse back in 2015. And on Tuesday, several hours before the Pennsylvania grand jury published its report, Chilean police raided the country’s bishops’ conference in connection to an ongoing child abuse investigation involving the Congregation of the Marist Brothers.