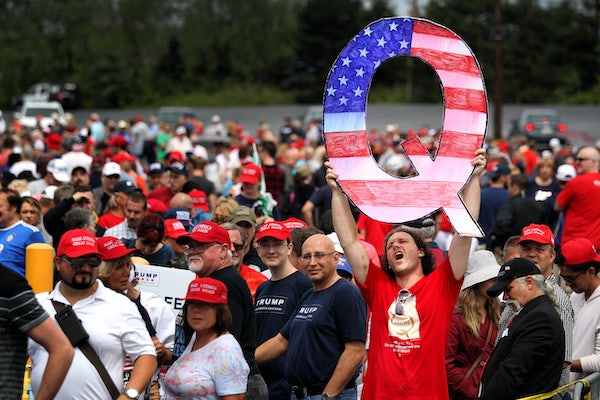 NBC News has blockbuster report by Brandy Zadrozny and Ben Collins tracking the spread of the so-called QAnon online conspiracy theory. While the report doesn’t answer the question of who created QAnon, it does provide a convincing account of how it went from being an obscure series of internet postings to a theory with a mass following, often visible at the rallies of President Donald Trump. Although sprawling and opaque, the core of the QAnon theory is that President Donald Trump is fighting a secret war against a cabal of pedophiles who dominate the American government and Hollywood.

Key to the spread of QAnon were a handful of social-media savvy entrepreneurs. “In November 2017, a small-time YouTube video creator and two moderators of the 4chan website, one of the most extreme message boards on the internet, banded together and plucked out of obscurity an anonymous and cryptic post from the many conspiracy theories that populated the website’s message board,” Zadrozny and Collins write.

A central figure in promoting QAnon is Tracy Diaz, a Youtube creator who had previously promoted the Pizzagate theory. In early November, Diaz started promoting QAnon, at that point only a few esoterica posts.

“Diaz followed with dozens more Q-themed videos, each containing a call for viewers to donate through links to her Patreon and PayPal accounts,” Zadrozny and Collins note. “Diaz, who emerged from bankruptcy in 2009, says in her YouTube videos that she now relies on donations from patrons funding her YouTube ‘research’ as her sole source of income.”

Diaz worked with the husband and wife team of Coleman Rogers and Christina Urso, who created “the Patriots’ Soapbox, a round-the-clock livestreamed YouTube channel for QAnon study and discussion. The channel is, in effect, a broadcast of a Discord chatroom with constant audio commentary from a rotating cast of volunteers and moderators with sporadic appearances by Rogers and Urso.” Like Diaz, Rogers and Urso used QAnon as a money making venture, picking up revenue from donations. Rogers, like Diaz, had a history of subscribing to conspiracy theories before QAnon. He had previously promoted the idea that Democrats worshipped Satan.

As NBC reports, some QAnon skeptics suspect Rogers as the probably fabricator of Qanon’s posts:

Still, Qanon skeptics have pointed to two videos as evidence that Rogers had insider knowledge of Q’s account. One archived livestream appears to show Rogers logging into the 8chan account of “Q.”The Patriots’ Soapbox feed quickly cuts out after the login attempt. “Sorry, leg cramp,” Rogers says, before the feed reappears seconds later.

Whoever QAnon might be, we now have a better understanding of the mercenary infrastructure that made it popular.