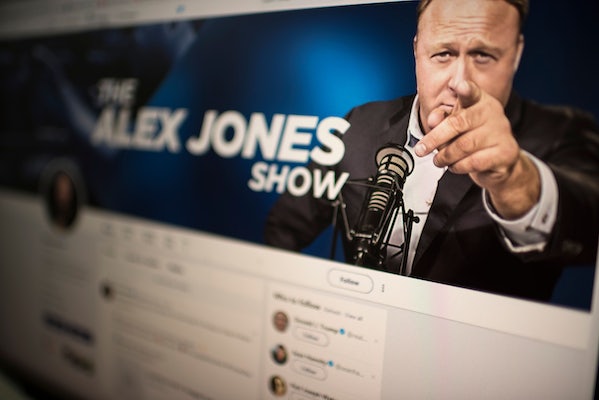 Twitter CEO suspends Alex Jones but still doesn’t understand who he is.

Of all the big social media outlets, Twitter has been the most reluctant to sever ties with Jones, a notorious conspiracy theorist. While Facebook, Apple and Youtube have all banned Jones, Twitter has only suspended Jones for one week.

Defending the suspension in an interview with NBC, Twitter CEO Jack Dorsey argued the goal was to get Jones to transform his behavior. “Whether it works within this case to change some of those behaviors and change some of those actions, I don’t know,” Dorsey said. “But this is consistent with how we enforce.” The CEO added: “We can’t build a service that is subjective just to the whims of what we personally believe.”

The interview is alarming evidence that Dorsey doesn’t actually understand who Alex Jones is (and, by extension, who many of the other bad actors who exploit social media are). To talk about Jones changing his behavior is to assume Jones is basically a rational person who is sometimes tactless. But conjuring up ludicrous conspiracy theories that lead to harassment isn’t incidental to Jones, but integral to his entire public project.

In a useful rundown of Jones’ ideas, Rolling Stone noted that he’s someone who has argued that satanists are taking over America, Glenn Beck is a CIA agent, Bill Gates is trying to exterminate minorities, Hillary Clinton runs a pedophile ring out of a pizza shop, the government controls the weather and countless shootings aside from the Sandy Hook massacre were false flag operations. In other words, lies and absurdity are inextricable from Jones, they are the very essence of his worldview. There’s no reason to think this is incidental behavior that can be changed. Or rather, there is no reason to think this unless you run a social media platform and want to keep Jones on it.