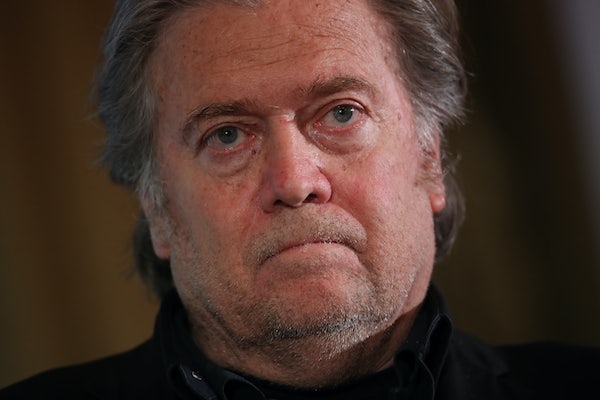 Steve Bannon forms a new group to make the midterms all about Trump.

The former CEO of Trump’s 2016 presidential campaign has been in the political doghouse for most of this year. Bannon lost his lustre among Republicans and the president himself after critical remarks he made about Donald Trump Jr., and after his support of Roy Moore’s Alabama Senate bid ended with the Democrats winning what should have been a safe Republican seat. Still, despite losing his perch as head of Breitbart News and the patronage of the billionaire Mercer family, Bannon clearly wants to keep his hand in Republican politics.

The New York Times reports that Bannon is back with a new group called  Citizens of the American Republic which will “try to sell voters on a midterm message that they should support Republicans to defend the Trump agenda and save the president from impeachment.” As with previous Bannon efforts, the main focus will be on ideological messaging rather than grass roots organizing. “But Mr. Bannon, who insists that approaching congressional races as one-offs is a waste of time, is planning a messaging push on cable television, the op-ed pages of newspapers and local conservative radio shows,” The Times notes. “His premise is that more of Mr. Trump will be a good thing.”

As Axios reports this morning, part of Bannon’s propaganda strategy is a new movie titled Trump @ War. A trailer fro the film is now available:

Although he’s now something of a pariah in Trumpian and GOP circles, Bannon’s approach is very much the one that Trump himself has embraced when he goes to campaign on behalf of candidates, which is to make each election about Trump himself. And the Republican Party itself seems to feel that embracing Trump is the way to go, with candidates who act like the president and praise him elbowing out critics.

This strategy of making everything about Trump is the opposite of how the Democrats are approaching the midterms. The Democratic Party’s strategy is not to nationalize the elections, to let each local candidate shape a message, and to avoid talking about Trump in areas where the president is popular.

It’s unlikely that Bannon’s new gambit will win him a spot in the president’s good graces again. Still, Bannon’s actions do show that he’s still on the same page as the president and the larger GOP.