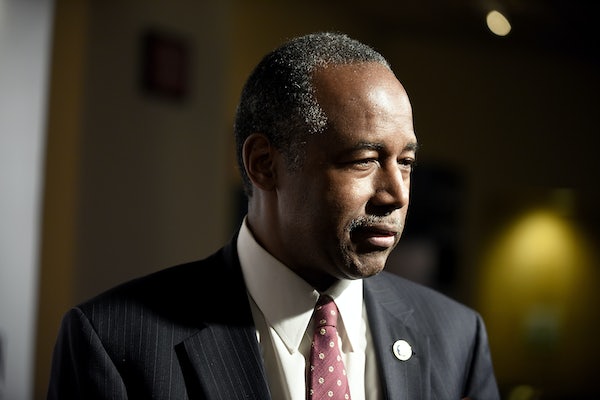 Since taking over HUD, Carson has been on a mission to absolve the department of its responsibilities to desegregate housing. The Affirmatively Furthering Fair Housing (AFFH) rule was instated by Barack Obama’s HUD in 2015 to strengthen the 1968 Fair Housing Act, by forcing municipalities receiving federal funding to assess local housing segregation—and come up with plans to fix it. Carson has been slowly killing Fair Housing enforcement (which he once compared with “the failure of school busing”) since January, when HUD issued a notice to suspend enforcement of the rule until 2020.

This week, HUD announced proposed changes to the rule to “minimize [the] regulatory burden” on local governments. In a statement, the National Fair Housing Alliance, which is one of several groups currently suing Carson for the rule’s suspension, said that any reconsideration of the rule “must account for the fact that HUD has a track record of more than 40 years of failing to properly ensure compliance” with its Fair Housing mandate. A research group at MIT found in 2017 that only two years into AFFH, the rule had supported more ambitious desegregation plans in almost every participating municipality.

Carson says the rule is “suffocating investment in some of our most distressed neighborhoods,” which is straight out of the pro-development handbook. As an affordable housing crisis intensifies across the country, the belief of housing development advocates in the power of higher density to “naturally” create more affordable housing has become increasingly widespread. But without any guarantee that this additional housing would be offered at affordable rates, there’s little reason to believe that more density will lead to anything but more displacement and more segregation.