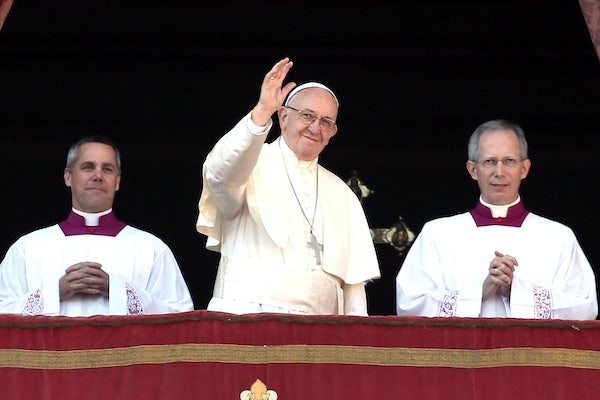 “With shame and repentance, we acknowledge as an ecclesial community that we were not where we should have been, that we did not act in a timely manner, realizing the magnitude and the gravity of the damage done to so many lives,” Pope Francis said in a statement released on Monday morning. “We showed no care for the little ones; we abandoned them.” It’s the Vatican’s most detailed response to a Pennsylvania grand jury report that named over 300 predatory priests and over 1000 victims of child sex abuse. But while Francis’s statement expresses remorse, it does not explain what the Catholic Church intends to do in response to the crisis, nor does it apologize for Francis’s previous stumbles on the sex abuse issue. As the Associated Press reports:

Francis several years ago scrapped a proposed Vatican tribunal to prosecute negligent bishops, and he has refused to act on credible reports from around the world of bishops who have failed to report abusers to police or otherwise botched handling cases, and yet remain in office.

Francis also has kept on his nine-member kitchen cabinet a Chilean cardinal long accused of covering up for pedophiles, an Australian cardinal currently on trial for historic sex abuse charges and a Honduran cardinal recently implicated in a gay priest sex scandal involving his trusted deputy.

The church has made some reforms to address the issue of child sex abuse, as I reported on Friday. Review boards and human formation courses at seminary are intended to provide oversight and to properly prepare priests for lifetime celibacy. But many victims believe those efforts are inadequate. Victims of clergy abuse in Ireland, where Pope Francis travels on Saturday, have already condemned Monday’s statement. “Mere words at this point deepen the insult and the pain,” Anne Barrett Doyle, a victim advocate, told the AP.