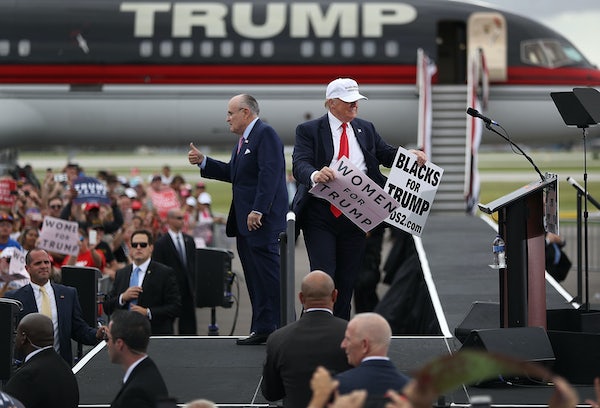 On Sunday, Brennan, former director of the Central Intelligence Agency, indicated that he was considering taking legal action against the Trump administration to prevent other government officials from being stripped of their security clearance. On Monday both the president and his lawyer, Rudy Giuliani, responded with tweets:

Giuliani’s tweet is strangely worded and hard to decipher. But what he is basically saying is that Brennan’s threatened lawsuit is hot air (like Obama’s threat to punish Bashar al-Assad for using chemical weapons). Giuliani is taunting Brennan, daring him to launch the lawsuit.

But even on those terms, Giuliani’s tweet is odd because if Brennan did sue, the case would not be taken up by Trump’s private lawyers (Giuliani and Jay Sekulow) but rather by the Justice Department. Also, mocking Brennan for threatening a lawsuit is an odd look for someone representing Donald Trump, who has on more than 40 occasions made legal threats that were not carried out.