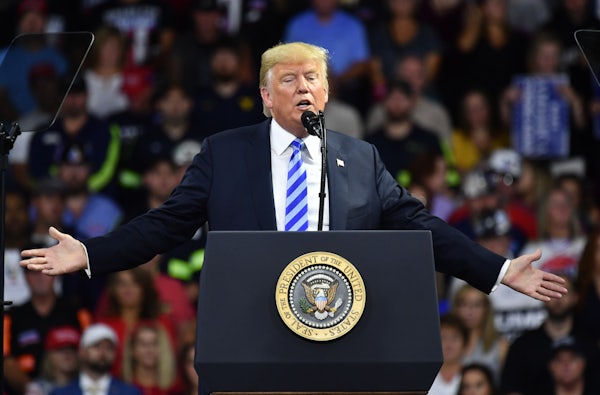 In a subdued rally, Trump says very little about conviction of former associates.

The president is still capable of surprises. After a roller coaster day which saw his former campaign chairman convicted on eight counts of financial crimes and his former lawyer pleading guilty to eight counts including campaign finance violations that implicate Trump himself, the president was widely expected to go off the rail at a rally in West Virginia.

Instead, Trump only made glancing reference to the day’s legal news and gave a subdued but lengthy performance where he hit many of his familiar talking points.

Trump praised coal. He mocked Nancy Pelosi, Chuck Schumer, and Maxine Waters. He demonized “illegal aliens.” He falsely claimed the Mexican border wall was being constructed. He praised ICE. He derided NATO allies. He led chants of “lock her up” and “drain the swamp.” He described West Virginia Governor Jim Justice as “the largest, most beautiful man” and “6-foot-11.” (Justice is 6-foot-7). He teased Justin Trudeau. In short: a medley of Trump’s greatest hits—a mixture of lies, blarney, and bravado.

At one point he did sneer at “the fake news” media for concentrating on Russian collusion. “Where is the collusion?” He asked. “You know, they’re still looking for collusion! Find some collusion!”

But as Toronto Star reporter Daniel Dale noted, this was actually less reference to the Mueller investigation than is the norm for Trump. The names Paul Manafort and Michael Cohen went unmentioned.

The Mueller investigation may or may not be on Trump’s mind, but it’s not on Trump’s lips, at least when he talks to his supporters.