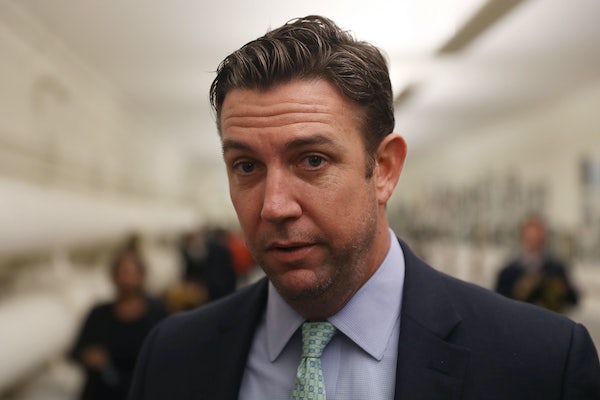 Duncan Hunter’s corruption indictment should not be buried in the news avalanche.

On Tuesday, California Republican congressman Duncan Hunter and his wife Margaret Hunter were indicted on corruption offenses relating to misusing campaign funds. On almost any other day, this would have been front-page news, since the indictment alleges an array of astonishingly corrupt practices.

The Washington Post notes the charges read “like a caricature of a corrupt, greedy politician.” The newspaper adds: “Federal prosecutors allege that he and his wife stole $250,000 in campaign funds to do things like take their family to Italy (and buy a three-piece luggage set for it), buy their kids’ school lunches, treat family and friends to hotel rooms and wine and golf, and fly a family member’s pet to Washington, D.C., for vacation.”

To justify a family trip to Italy as an expense, Hunter asked to visit a naval base in that country. When his request was denied, Hunter said, “Tell the Navy to go fuck themselves.”

It’s too late to remove Hunter from the ballot, so the indictment could have a real-world electoral effect. If voters decide to punish Hunter, that’ll bring the Democrats one seat closer to a majority.