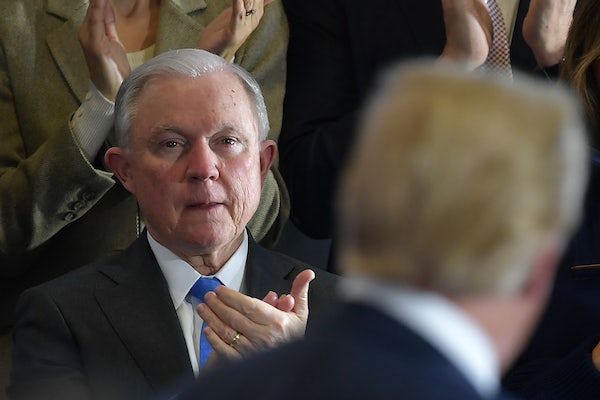 After the president criticized the department and Sessions’s leadership of it on Thursday morning, the attorney general fired back in a rare public retort. “While I am attorney general, the actions of the Department of Justice will not be improperly influenced by political considerations,” Sessions said.

Sessions was the first sitting senator to endorse Trump in 2016, and was one of his closest advisers. But he became a frequent target of the president’s anger for recusing himself from the Russia investigation. In a Fox News interview on Thursday morning, Trump said without merit that the department had become a tool of his political opponents. “I put in an attorney general that never took control of the Justice Department,” he said. The president also complained that Sessions had not used his office to shield Trump and his allies from political harm. “You know, the only reason I gave him the job is because I felt loyalty,” he explained.

Since their rupture, Trump often attacks Sessions in interviews and urges him to take aggressive steps against the Russia investigation in Twitter posts. Thursday’s statement is one of the few times that Sessions has responded in public. As in a statement in March, after Trump criticized him on Twitter, he did not directly name the president. But the timing and content amounts to a reaffirmation of the Justice Department’s traditional independence from the White House—and from Trump.

Beyond the Russia investigation, though, Sessions is perhaps the most effective member of Trump’s cabinet when it comes to executing the president’s policy vision. His Justice Department has taken a hardline policy toward undocumented immigrants, including the widely criticized family-separation plan earlier this year. But this apparently matters less to Trump than Sessions’s subservience to him.