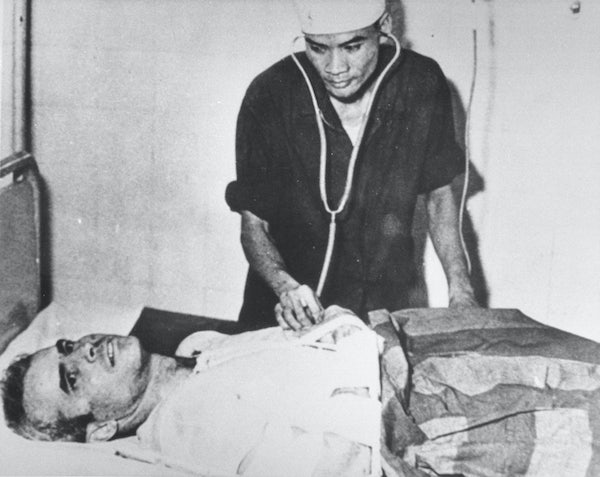 The Washington Post is reporting that the White House crafted a statement eulogizing John McCain, who died on Saturday, only to have it vetoed  by President Donald Trump.

“Press secretary Sarah Huckabee Sanders, Chief of Staff John F. Kelly and other White House aides advocated for an official statement that gave the decorated Vietnam War POW plaudits for his military and Senate service and called him a ‘hero,’ according to current and former White House aides, who spoke on the condition of anonymity to discuss sensitive internal deliberations,” the newspaper notes. “The original statement was drafted before McCain died Saturday, and Sanders and others edited a final version this weekend that was ready for the president, the aides said.”

Instead of using the words his staff suggested, Trump tweeted out a statement offering sympathy to McCain’s family but no words of praise for the deceased statesman:

As The New York Times notes, “The president did not make even the most cursory public show of respect on Sunday for Mr. McCain, against whom he had continued to indulge a personal grievance even as it was apparent that the Arizona Republican was losing his battle with brain cancer. The president spent much of the day golfing and attacking his usual enemies on Twitter.”

It seems like the word Trump bristled at was “hero.” Only July, 18, 2015, then candidate Trump famously said McCain was “not a war hero. He’s a war hero because he was captured. I like people that weren’t captured.” According to The Washington Post, Trump to this point continues “to believe that McCain was not a war hero.”

Trump’s continued coolness to McCain stands in contrast to the effusive praise the late senator is receiving from other Republican politicians, from many Democrats, and from America’s allies.