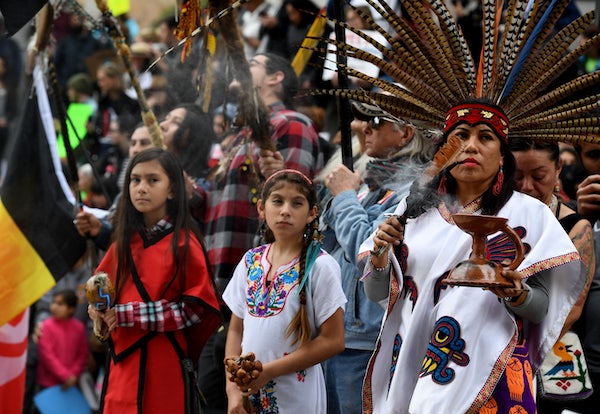 On Friday, at a speech in Fargo, North Dakota, the president made a strange appeal to Native American voters. “Maybe they don’t know about what’s going on with respect to the world of Washington and politics, but I have to tell you, with African-American folks, I would say what do you have to lose?” he asked.

Trump has often made disrespectful comments about Native Americans. Testifying before congress in 1993, he challenged the casino licence given to some reservations. “If you look, if you look at some of the reservations that you’ve approved, that you, sir, in your great wisdom have approved, I will tell you right now—they don’t look like Indians to me,” Trump said.

“The President has a long record of attacking Native Americans,” Simon Moya-Smith, a citizen of the Oglala Lakota Nation, argued in 2017. “He pushed through the Dakota Access Pipeline, which violates the Native American land and threatens indigenous lives and water. And while that pipeline was already leaking like a garden hose with bullet holes, he resurrected the Keystone XL Pipeline, which again is in direct violation of our sovereign treaty rights.” Moya-Smith also mentioned Trump’s frequent use of the name “Pocahontas” as a slur directed against Elizabeth Warren.