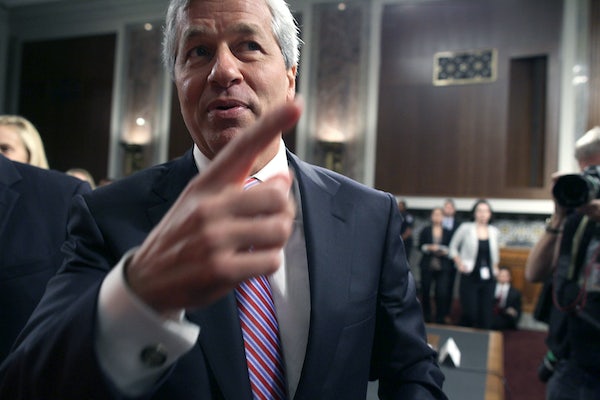 Speaking at a corporate event in New York on Wednesday, the CEO of J.P. Morgan Chase offered an equivocal answer on the question of whether he would run for president. “I think I could beat Trump,” Dimon boasted. He then qualified the comment with a proviso: “I can’t beat the liberal side of the Democratic Party.”

As Dimon acknowledges, wealthy bankers are not usually good candidates for high political office, but the election of President Donald Trump has changed the scope of what is politically possible. “I’ve said this before Trump was elected,” he noted. “You’re not going to get a wealthy New Yorker elected president. Boy I was dead wrong.”

Dimon stacked himself up against Trump and notes he has both strengths and weakness. “And by the way, this wealthy New Yorker [pointing to himself] actually earned his money,” Dimon said. “It wasn’t a gift from daddy. And I grew up in a poorer part of Queens than he did, but I am a banker. I am part of the elite ... I don’t think the American public looks at Trump as part of the elite. They look at him as the upstart who punched the elite in the nose every day.”

What’s missing from Dimon’s analysis is any awareness that politicians need a mass constituency. Donald Trump became president because he was able to mobilize large blocks within the Republican Party, notably white evangelicals and nativists. Dimon’s problem isn’t just that he’d be opposed by the liberal wing of the Democratic Party, it’s that there is no clear constituency for him. People might be willing to vote for a “wealthy New Yorker” if they like his or her politics, but surely not simply because he or she is a wealthy New Yorker.

Update: Dimon later regretted his comments, issuing a statement that read, “I should not have said it. I’m not running for president. Proves I wouldn’t make a good politician. I get frustrated because I want all sides to come together to help solve big problems.”