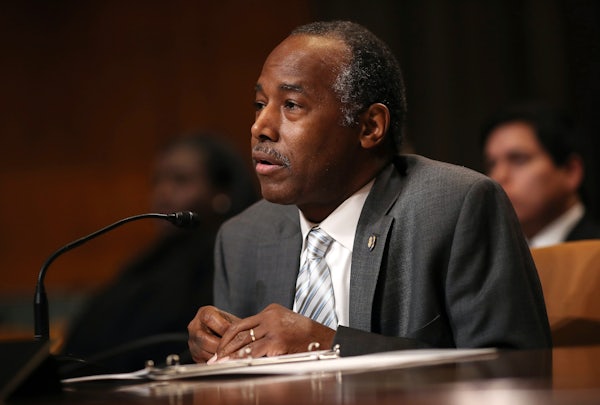 The Washington Post reported on Thursday that the Department of Housing and Urban Development awarded large salaries to staffers with little experience and few academic credentials:

The raises, documented in a Washington Post analysis of HUD political hires, resulted in annual salaries between $98,000 and $155,000 for the five appointees, all of whom had worked on Donald Trump’s or Ben Carson’s presidential campaigns. Three of them did not list bachelor’s degrees on their résumés.

As the Post notes, HUD Secretary Ben Carson has no relevant experience himself. He’s a retired neurosurgeon, with no specialized skill or expertise in housing or welfare policy. In a statement, HUD assured the Post that it does have an experienced senior team, adding, “HUD employees represent a broad array of backgrounds and experiences, as different roles have unique responsibilities and require diverse skill sets.”

But under Carson’s tenure, HUD has steadily devolved into a do-nothing department. As Alec MacGillis reported for ProPublica in August, HUD is directly responsible for the housing needs of millions of low-income America. Its mission is welfare, and that makes it a target for small-government conservatives. With Carson at the helm, HUD gradually slowed or ceased many existing initiatives, especially if those initiatives pertained to protecting the rights of LGBT people. “Virtually all the top political jobs below Carson remained vacant. Carson himself was barely to be seen—he never made the walk-through of the building customary of past new secretaries,” MacGillis wrote.

HUD has also rolled back efforts to enforce fair housing policy, and in May, Carson put forward a housing proposal that would triple rents for the poorest residents in public housing.