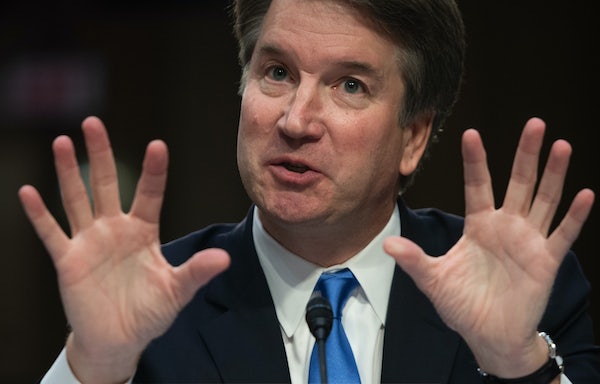 A bizarre doppelgänger theory testifies to the desperation of some Brett Kavanaugh supporters.

Amid negotiations on the rules for Senate hearings into the allegations of sexual assault leveled against the Supreme Court nominee by Christine Blasey Ford, some of his backers are starting to promote a truly strange scenario: Yes, Ford might have been the victim of an attempted rape when she was 15, but Kavanaugh wasn’t the guilty party. Rather, it was another teenage boy who looked like Kavanaugh, and, thanks to the haze of memory, has become conflated with the judge in her mind.

“Could there be a Kavanaugh doppelgänger?” Washington Post columnist Kathleen Parker asked on Tuesday, noting that the possibility of a mix up or case of mistaken identity had been raised by both Utah Senator Orrin Hatch and The Wall Street Journal.

Doppelgänger theory reached its most elaborate flight in a Twitter thread posted Thursday night by Ed Whelan, a longtime Kavanaugh ally who is also president of the Ethics and Public Policy Center. As summed up by Vox, Whelan’s Twitter essay “argued that based on Christine Blasey Ford’s statements of what happened that night back in 1982, the perpetrator was likely not Kavanaugh, but a classmate of Kavanaugh’s at Georgetown Prep who, in Whelan’s view, looked a lot like Kavanaugh.” The main basis of Whelan’s argument, such as it is, was maps taken from the real estate website Zillow and high school yearbook photos.

Near the end of his thread, Whelan writes, “It is regrettable that private citizens are being drawn into this.” That’s a audacious statement to make given that is exactly what he himself is doing. Whelan’s attempt to play internet Sherlock Holmes and use circumstantial evidence to smear a private citizen was, in the words of CNN’s Jake Tapper, “wildly irresponsible.”

Beyond irresponsible, doppelgänger theory is also hugely implausible in any form. As The Washington Post reports:

Ford dismissed Whelan’s theory in a statement late Thursday: “I knew them both, and socialized with” them, Ford said, adding that she had once visited the other classmate in the hospital. “There is zero chance that I would confuse them.”

Yet as unlikely as it is, doppelgänger theory makes sense when you realize it satisfies a particular political need: Ford’s accusation creates a hurdle to Kavanaugh’s confirmation, but Republicans are reluctant to attack her in the manner that they (and some Democrats) went after Anita Hill during the Clarence Thomas nomination in 1991. Smearing a woman who makes a serious sexual assault allegation looks bad, politically, in the era of #MeToo.

According to Post, “Kavanaugh and his allies have been privately discussing a defense that would not question whether an incident involving Ford happened, but instead would raise doubts that the attacker was Kavanaugh, according to a person familiar with the discussions.” Doppelganger theory provides exactly the defense needed: Kavanaugh’s defenders don’t have to call Ford a liar, just a confused victim. They can acknowledge that she suffered sexual assault, but also that Kavanaugh himself was not responsible for it.

Update: On Friday morning, Whelan apologized for naming the Kavanaugh classmate whom he believes, without evidence, was Blasey’s actual attacker. But he did not recant his doppelgänger theory.