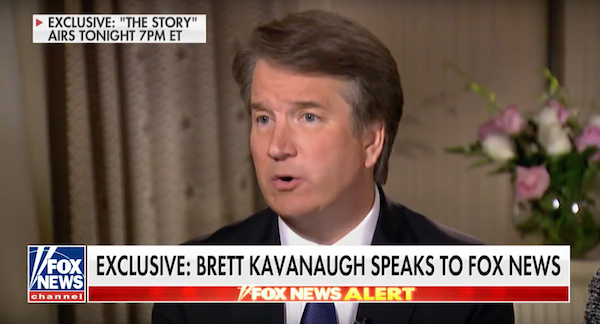 In an interview on Monday with Fox News’ Martha MacCallum—his first since being accused of sexual misconduct by multiple women—the embattled Supreme Court nominee largely stuck to a handful of stock phrases, none more frequent than: “All I’m asking for is a fair process where I can be heard.”

MacCallum, who was one of the first Fox personalities to defend Roger Ailes in the wake of sexual misconduct allegations, admitted that Ford’s claims are “very specific.” But for the most part, she let Kavanaugh skate, never pressing him beyond the rote claims he’d likely been instructed to recite. As The Washington Post reported on Saturday, White House aides have been quizzing Kavanaugh “about his sex life and other personal matters in an attempt to prepare him” for his scheduled hearing on Thursday before the Senate Judiciary Committee.

Kavanaugh, who appeared with his wife, Ashley, did manage a moment of surprise, describing himself as a virgin throughout high school and for several years afterward. He was focused on other matters, he said, like being first in his class and becoming captain of the varsity basketball team.

Kavanaugh’s virginity tangent can be interpreted either as a signal to Trump’s evangelical base that he practiced sexual purity, or as an argument that he was too hopelessly nerdy to have tried anything sexual with a female peer. Kavanaugh is not accused of rape, however, but of attempting to rape high school classmate Christine Blasey Ford and of exposing his genitals to Yale classmate Deborah Ramirez. His sexual experience is not in question, only his treatment of women. On that subject, too, Kavanaugh never deviated from a few select phrases. “I’ve always treated women with dignity and respect,” he repeatedly said. His wife repeatedly nodded.