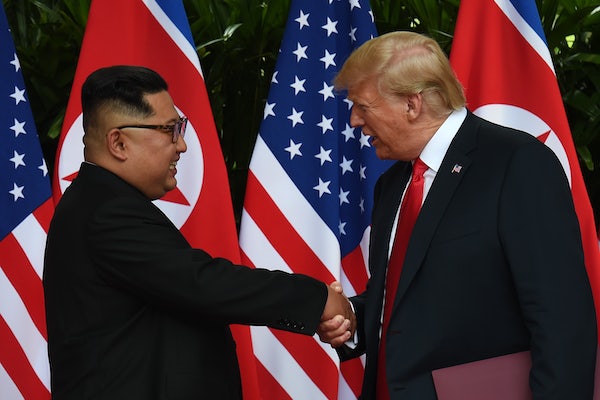 Trump regales a crowd with the story of how he and Kim Jong Un “fell in love.”

Addressing a rally in West Virginia, President Donald Trump spoke in the most extravagant terms yet about the personal relationship he’s nurtured with North Korean dictator Kim Jong Un. “I was really being tough, and so was he,” he began “We were going back and forth. Then we fell in love. OK? No, really. He wrote me beautiful letters. And they’re great letters. We fell in love.”

Trump tried to pre-emptively rebut what he anticipated would be critics of these remarks by noting, “But they’ll say ‘Donald Trump says they fell in love, how horrible.’” Trump made a non-sequitur in defense of his “love” comments by saying that if he were more presidential he would get far smaller crowds at his events.

Trump is, of course, allowed to say what he wants. But North Korea remains a brutal dictatorship which recently tortured an American citizen, returning him to the United States with severe brain damage that quickly led to his death. While Trump has a habit of praising dictators, his effusions for Kim are unusually florid.

Trump acts as if his brand of hyperbolic personal diplomacy can overcome negotiating barriers. To his credit, he has made more strides towards normalization of relations with North Korea than any previous president. Still, that normalization has come without any settlement of the key divide over denuclearization, which North Korea emphatically does not want till normalization is near complete.

The United States, on the other hand, remains firmly behind denuclearization as a top priority. The danger of Trump’s language of love is that if it fails to deliver results, it could quickly revert to the older words of hate Trump used to spew out before Kim wrote him “beautiful letters.”