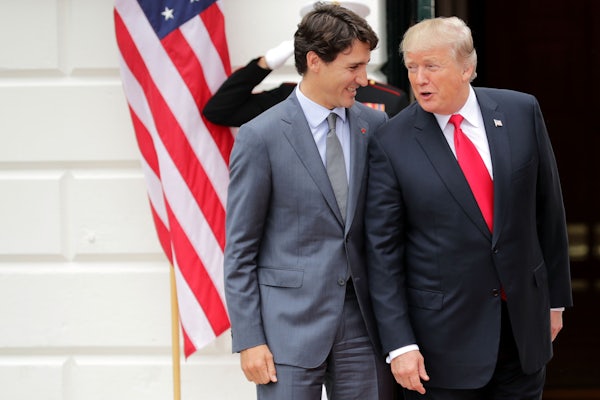 Meet the new NAFTA, almost the same as the old NAFTA but with a different name.

On Sunday night, senior officials in the Canadian government confirmed that their government had reached a tentative deal with the United States for a renegotiated North American Free Trade Agreement (NAFTA). Astonishingly, the new trade agreement is only a minor shift from the status quo and from previous agreements.

Canadian Prime Minister Justin Trudeau smiled as he said it was a “good day for Canada.”

The major victory for the Trump administration is that the Canadian market will be opened up for more American dairy products. But, as The New York Times notes, this opening “is similar to what the United States would have gained through the Trans-Pacific Partnership, a trade treaty that President Trump withdrew from last year.” Under the new agreement, the United States would now have access to 3.6% of Canada’s dairy market (TPP would’ve opened up 3.25% of the dairy market). In other words, the most significant concession Canada made was only slightly larger than what it had already been prepared to make. Aside from dairy products, the United States gained a concession on copyright, which will now be extended in Canada to 70 years after the original copyright holders death (currently it is 50 years).

In exchange for easier access to the Canadian dairy market, the United States has reportedly agreed to Canadian demands that it be allowed to keep in place protection of cultural industries and maintaining the existing tariff settlement system. As requested by the Canadian government, the new agreement would phase out Chapter 11, a section of NAFTA that allows investors to sue governments. President Trump has reportedly promised he won’t be putting tariffs on automobiles and automotive parts manufactured in Canada. While steel and aluminum tariffs will remain in place for now, the Canadian government expects them to be lowered in short order.

The changes are mostly cosmetic in nature in terms of the impact on Canadian/American trade. There is one other significant development in the realm of marketing. The trade deal will be renamed: NAFTA will now become USMCA (US-Mexico-Canada Agreement).