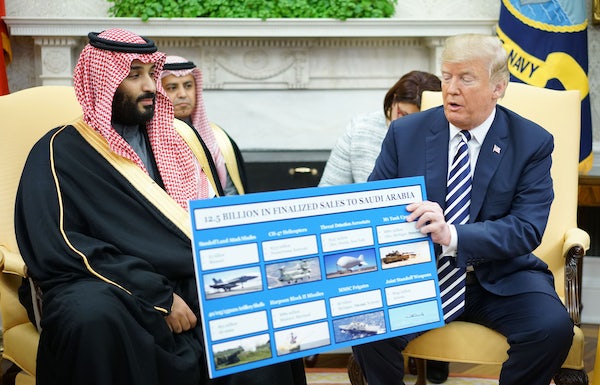 On Saturday, Toronto Star reporter Daniel Dale noted on Twitter that between March and last week, President Donald Trump stretched the number of jobs created by selling arms to Saudi Arabia from 40,000 to a million, a forty-fold increase:

On Sunday, Axios fleshed out Dale’s observation by providing more details showing the evolution of the president’s claim:

On March 20, during the Crown Prince’s visit, Trump claimed the Saudi purchases of U.S. weapons he arranged would generate “over 40,000 jobs in the United States.”

Last Saturday, Oct. 13, when Trump was asked if he’s considering punishing Saudi Arabia for murdering Washington Post columnist Jamal Khashoggi, Trump mentioned the same arms deal as the reason he was reluctant to stop the arms sales. That time, he said the deal created 450,000 jobs.

On Wednesday, Oct. 17, during a Fox Business interview, Trump inflated the statistic to 500,000 jobs.

On Friday, at lunchtime during a water rights memorandum signing, Trump increased the jobs number to 600,000.

A few hours later, on Friday evening at Luke Air Force Base in Arizona, Trump said the deal was worth 600,000 jobs for the military but “over a million jobs” in total.

Trump is, of course, a notorious prevaricator. Still, even by Trumpian standards, his disregard for truth or consistency on this matter is remarkable. Trump also also repeatedly misstated the size of Saudi arms deals he has negotiated, often throwing around the figure of $100 billion, when the actual sum to date is $3.4 billion.

Trump’s dissembling about the benefits of selling arms to Saudi Arabia likely comes from the oil-rich kingdom’s genuine importance to the president’s foreign policy. Trump’s has made Saudi Arabia a linchpin for his Middle Eastern policy, the key force behind the anti-Iran coalition that the president hopes to create. Given that agenda, Trump needs to hold tight to the Saudi alliance. To that end, apparently, he’s not afraid of juicing the numbers a bit.