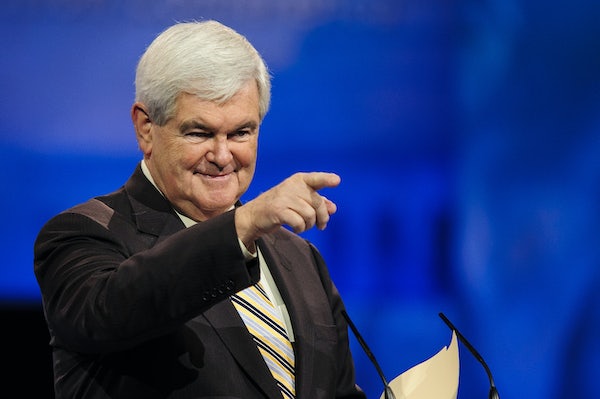 Newt Gingrich is counting on Brett Kavanaugh to protect Donald Trump from investigation.

In a public interview with The Washington Post, former Speaker of the House Newt Gingrich asserted that he wasn’t worried about President Donald Trump becoming entangled in lawsuits and scandal. “This is a billionaire who has fought lawsuits his entire career and he’s never noticed them. He doesn’t care,” Gingrich said. “That’s why he has lawyers. So they can come at him from 100 levels—he’ll just hire 100 lawyers.”

Asked by Washington Post columnist Karen Tumulty what would happen if Democrats won Congress and tried to subpoena the president’s tax returns, Gingrich replied, “Then they’ll be trapped into appealing to the Supreme Court, and we’ll see whether or not the Kavanaugh fight was worth it.” The audience at the interview reportedly gasped when he said this.

During the confirmation hearings for his Supreme Court nomination, Democrats repeatedly probed Kavanaugh for his views on executive authority to see if he would shield a president from investigation. Kavanaugh refused to elaborate his views on the matter. Rolling Stone described one such exchange:

Sen. Dianne Feinstein (D-CA), the judiciary committee’s ranking member, asked Kavanaugh about U.S. v. Nixon and whether a president should be immune from a criminal investigation. Kavanaugh said that Nixon was one of the four greatest Supreme Court decisions in history — along with Marbury v. Madison, Youngstown Sheet and Tube and Brown v. Board of Education — but when pressed by Feinstein about the broader question of requiring a sitting president to respond to a subpoena, Kavanaugh dodged the question.

“So you can’t give me an answer on whether a president has to respond to a subpoena from a court of law?” Feinstein said.

Kavanaugh went on talking but failed to address the issue, saying he would follow in the footsteps of previous nominees who had refused to answer hypothetical questions.