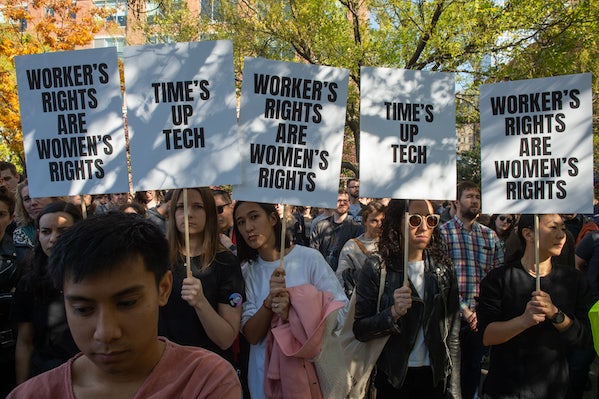 On Thursday, Google offices around the world saw employees stage protests against the company’s handling of sexual harassment cases. The trigger for the protests was a New York Times investigation into the company’s handling of sexual misconduct cases, documenting cases of powerful executives receiving large settlement packages to leave the company after credible allegations of harassment have emerged against them. A striking case involved Andy Rubin, the creator of the Android phone, who received a $90 million settlement even after the company concluded that an employee complaint that he had coerced oral sex from her was credible. (Rubin denies the allegation.)

The walkout spanned India, Singapore, Japan, Tokyo, the United States, and several European countries. “It’s just unfair that the women who are being attacked have to speak to the people above them in order to get change to happen,” a California-based Google contractor Taylor Reifurth told CNN. “Because sometimes their abusers are the ones above them and in charge of promoting them or in charge of their jobs. It’s a lose-lose situation.”

Outside the San Francisco office, more than 1,000 men and women employees assembled, chanting “women’s rights are worker’s rights.” Some held signs that mocked the payouts given to accused executives. “Happy to quit for $90 million. No sexual harassment required,” one read.

Organizers read a handful of anonymous stories about harassment from Google employees and listed the groups demands into a microphone. When asked how many people had their own stories of harassment that hadn’t been told, a number of attendees raised their hands.

In an essay for New York, organizers listed demands that included ending forced arbitration, a push to end pay and opportunity inequality, and transparent reporting of disclosed sexual harassment.