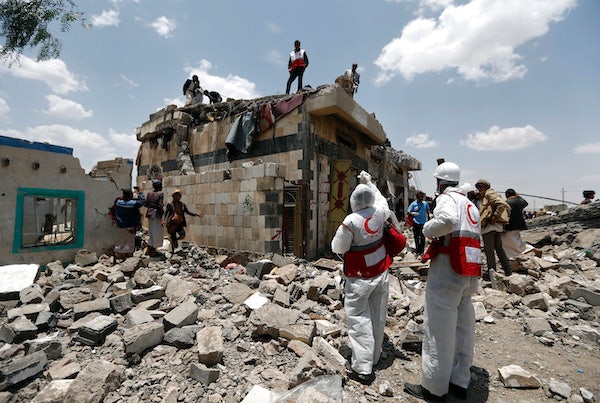 Trump laments that the Saudi military doesn’t “know how to use the weapons.”

In an interview with Axios that was aired on Sunday by HBO, the president disparaged the Saudi-led war in Yemen, which the United States supports. Asked about an August bombing of a school bus that left 51 civilians dead, including 40 children, Trump said, “I think it’s a terrible situation. I hated seeing what happened with the bus and the children cause that’s pure—that’s a horror show when you see a thing like that, you saw the bus.”

The president was unclear about whether this “horror show” would change American support for the Saudi’s in the war. “I’ll be talking about a lot of things with the Saudis,” Trump said. “But certainly I wouldn’t be having people that don’t know how to use the weapons shooting at buses with children.”

Criticism of Saudi Arabia has been rising in Congress, as a result of the murder of journalist Jamal Khashoggi as well as growing trepidation about the Yemen war, which has created a humanitarian catastrophe. There are predictions that soon as many as 14 million Yemeni citizens could be in danger of starving.

It would be a mistake to read Trump’s words as indicating any sort of shift in policy. The Trump administration has invested heavily in the Saudi alliance and shows no sign of recalibrating. As with the Khashoggi murder, the occasional humanitarian statement is more likely to be a sop to public opinion rather than a sign that the United States is now starting to hold Saudi Arabia accountable. Indeed, Trump’s own words in this case seem designed to frame Saudi action as a result incompetent execution rather than a question about the justness of the war itself.