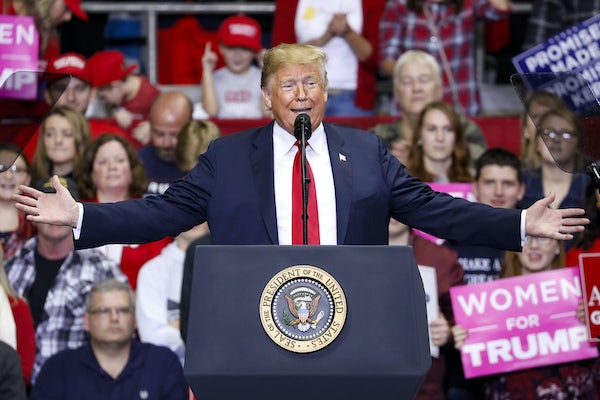 Trump incites a “lock her up” chant against women who make sexual harassment accusations.

At a rally in Indiana, President Donald Trump closed out his midterm campaigning by returning to the accusations against Supreme Court Justice Brett Kavanaugh. Trump told the story of one of the women whose accusations was investigated by the Senate Judiciary Committee, although it didn’t receive much media attention or get taken up by the Democrats. “This woman came out and said she made up the story,” Trump said. This incited the crowd to go into an extended “lock her up” chant, which the president egged on by raising his hands like a conductor. Then Trump extended his critique to other women who made similar accusations, including presumably those that were much more substantial, such as Christine Blasey Ford and Debbie Ramirez.

Later at another Trump rally in Missouri, Rush Limbaugh made a more familiar use of “lock her up.” The radio host accused Hillary Clinton of colluding with Russia and rigging an election. This immediately got the crowd worked up into a frenzy.