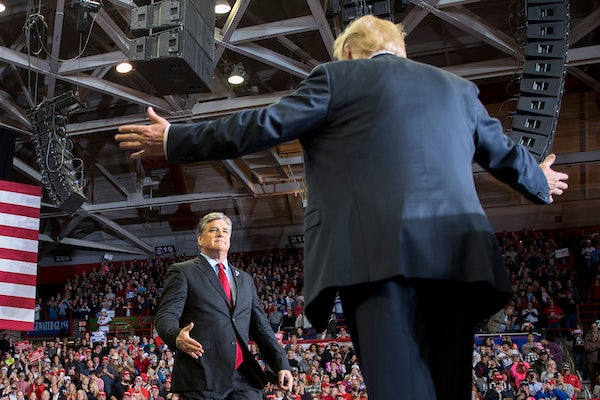 On Tuesday, the White House billed Fox News host Sean Hannity as a “special guest” at President Donald Trump’s final pre-election rally in Missouri, saying he would appear alongside radio host Rush Limbaugh and singer Lee Greenwood. But after an outcry from critics, Hannity tweeted that he was not there to drum up support for the president or Republicans, but to interview Trump for his radio show. Fox News told journalistic outlets the same thing.

Then, twelve hours after the White House’s announcement, Trump called Hannity onstage, where he labeled the journalists covering the rally “fake news” and spouted Trump’s 2020 reelection slogan, “Promises Made, Promises Kept.” Bizarrely, Hannity also claimed he had “no idea” Trump was going to call him to the stage. Fox News host Jeanine Pirro also appeared with Trump.

It was inevitable that Trump, Hannity, and Pirro would appear together at a campaign rally. Hannity and Pirro’s coverage has mirrored and amplified the White House’s messaging since Trump’s inauguration. But a number of journalists and pundits criticized Hannity’s decision to campaign on behalf of Trump and Republicans.

Under Roger Ailes, Fox News would block these blatant displays of favoritism to preserve a fig leaf of journalistic integrity that pundits like Hannity and Pirro have never deserved. Back in 2010, the network canceled a Hannity appearance at a Tea Party rally, fearing that it would damage the institution’s journalistic integrity. That integrity is long gone, at least for the network’s late-night stars—and especially for Hannity. This will damage the credibility of actual journalists like Shep Smith and Chris Wallace, but in a way it’s more honest, too: Fox News has always been more of a Republican propaganda outlet than a news organization. It’s finally admitting it.