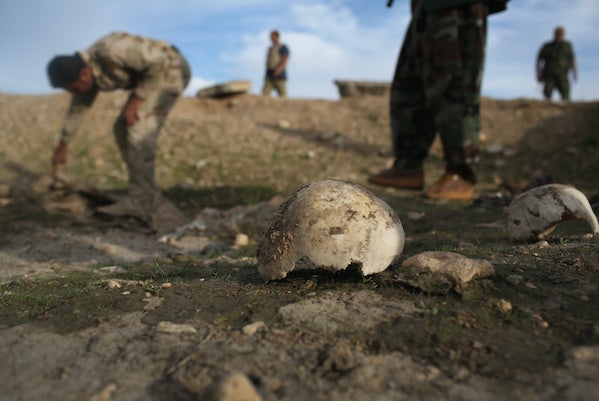 The BBC is reporting that a United Nations investigation has found 202 mass graves, which might contain between 6,000 and 12,000 victims, in Ninevah, Kirkuk, Salah al-Din and Anbar in Iraq. The killings occurred between 2014 and 2017, when the Islamic State held territory. According to the BBC, the victims include “women, children, the elderly, people with disabilities, foreign workers, and members of the Iraqi security forces.”

The full UN report calls for greater funding and resources to examine the mass graves, with an eye toward eventually building a war crimes or genocide case:

Mass grave sites could potentially contain critical forensic material that may not only assist in the identification of victims’ remains, but also build an understanding around the scale of abuses and violations that occurred and support the process of determining whether the acts that led to these mass graves amount to war crimes, crimes against humanity or genocide. The evidence gathered from these sites will be central to ensuring credible investigations, prosecutions and convictions, in accordance with international due process standards. Exhumations not in line with international standards and best practice could lead to the destruction or loss of critical evidence and complicate the identification of bodies, thereby extending the grief of affected families and undermining their right to truth, justice and reparations.

The Islamic State has been largely vanquished in Iraq, although there are still pockets of the nation where the group persists. The United Nations is calling for Iraq to set up a centralized registry to more efficiently help survivors find out information about the dead.