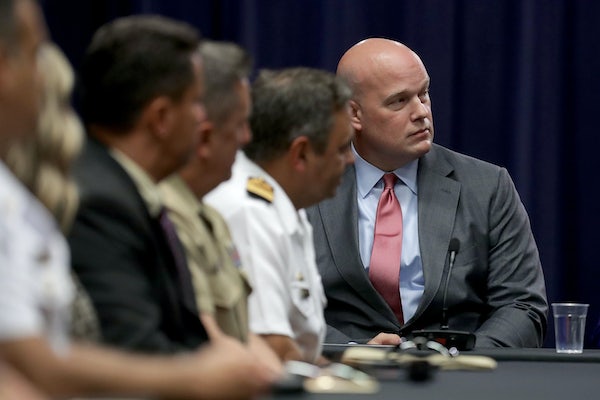 The new acting attorney general is hostile to the mission of the Mueller investigation.

With the forced resignation of Attorney General Jeff Sessions, attention has turned to his replacement, Matthew Whitaker, a GOP functionary who has a long history of extreme statements condemning the Mueller investigation. Mother Jones reports that Whitaker believes that the president has the power to shut down any federal investigation. “There is no case for obstruction of justice because the president has all the power of the executive and delegates that to people like the FBI director and the attorney general,” Whitaker told a radio show in 2017. “The president could and has in our nation’s history said stop investigating this person or please investigate this other person.”

In another 2017 interview, flagged by The Daily Beast, Whitaker made clear he already dismissed any possibility that the Trump campaign could be culpable for Russian interference in the election, the very subject special counsel Robert Mueller is investigating. “The truth is there was no collusion with the Russians and the Trump campaign,” Whitaker said. “There was interference by the Russians into the election, but that was not collusion with the campaign. That’s where the left seems to be combining those two issues.”

CNN reports of yet another interview from 2017 where Whitaker described Mueller’s appointment as special counsel as being “ridiculous” and “a little fishy.”

But even as Whitaker questions Mueller’s appointment, his own appointment to the position as acting attorney general is being interrogated. In an op-ed in The New York Times, Neal Katyal and George Conway argue on constitutional grounds that a “principal officer must be confirmed by the Senate.” If that constitutional principle is valid, the Whitaker can’t simply be elevated from being Jeff Sessions’s chief of staff to having a cabinet-level position.

As Katyal and Conway contend, “Constitutionally, Matthew Whitaker is a nobody. His job as Mr. Sessions’s chief of staff did not require Senate confirmation. (Yes, he was confirmed as a federal prosecutor in Iowa, in 2004, but Mr. Trump can’t cut and paste that old, lapsed confirmation to today.) For the president to install Mr. Whitaker as our chief law enforcement officer is to betray the entire structure of our charter document.”