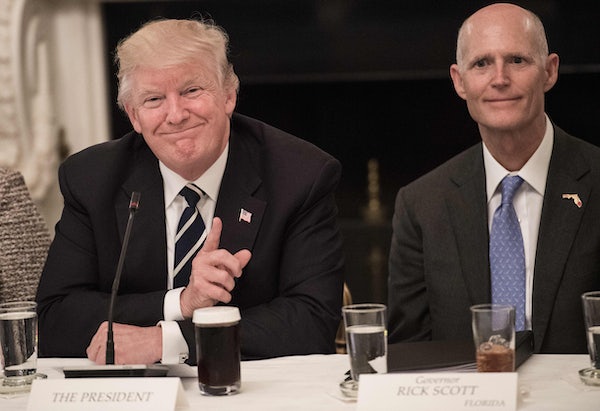 At a press gaggle on Friday morning, President Donald Trump suggested there was some connection between Fusion GPS, the security firm that prepared a notorious dossier on Russian interference in the 2016 election, and the ongoing vote count in Florida.

“If you look at Broward County, they have had a horrible history,” Trump said. “And if you look at the person, in this case a woman, involved, she has had a horrible history. And all of a sudden they are finding votes out of nowhere. And Rick Scott who won by, it was close but he won by a comfortable margin, every couple hours it goes down a little bit. And then you see the people, and they were involved with the fraud of the fake dossier, the phoney dossier, and I guess I hear they were somehow involved or worked with the GPS Fusion people, who have committed, I mean you look at what they’ve done, you look at the dishonesty, look, look, there’s bad things gone on in Broward County, really bad things.”

The president’s words are confusing but they seem, as so often, to have their origins in something he heard on Fox News. In this case, Sean Hannity was making the Fusion GPS claim on Thursday night.

In the same press gaggle, the president lashed out at CNN reporter Abby D. Phillip for asking whether Acting Attorney General Matthew Whitaker would rein in special counsel Robert Mueller. He called it a “stupid question” but did not answer it.