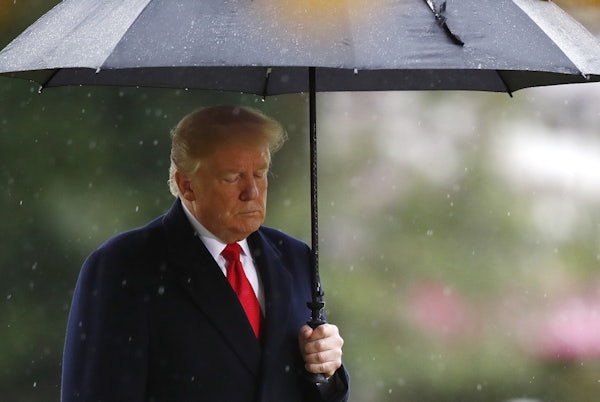 Trump’s trip to France was a fiasco.

Under any normal presidency, a visit to France to mark the 100th anniversary of the end of World War I would be one of the easiest possible diplomatic assignments. After all, France is one of America’s oldest allies and American participation in the two world wars is recalled with gratitude and forms the historical foundation for the contemporary Western alliance. But President Donald Trump went to Europe at a fraught moment, with his party coming to terms with a midterm drubbing that will put the Democrats in charge of the House of Representatives. Now facing an emboldened opposition that will soon have subpoena power, Trump seemed to have gone to Europe in a sour mood, which infected the weekend.

The first big blunder was the failure to attend the ceremony at the Aisne-Marne American cemetery on Saturday morning. The pretext for missing the event, that rain prevented the planned helicopter trip, suggested at the very least poor planning. Why wasn’t there a back-up plan in case of rain, as is normal in presidential trips? Other leaders managed to make it to the cemetery, which made Trump’s absence all the more striking.

Trump did make it to the Sunday event, where he made an awkward joke about the rain. Calling out a group of American World War II veterans, he said, “You look so comfortable up there under shelter as we’re getting drenched. You’re very smart people.”

On Sunday, Russian President Vladimir Putin flashed Trump a thumbs up. Putin said that he and Trump weren’t going to meet privately at the “request” of their French host.

To top off a weekend of failed diplomacy, French President Emmanuel Macron used Sunday, while making a speech about the war that still remains France’s dominant historical experience of the last century, to lambast Trump’s America First nationalism.

“Patriotism is the exact opposite of nationalism,” Macron intoned. “Nationalism is a betrayal of patriotism. By saying ‘our interests first; who cares about the others?’, we erase what a nation holds dearest, what gives it life, what makes it great, and what makes it essential—its moral values.”