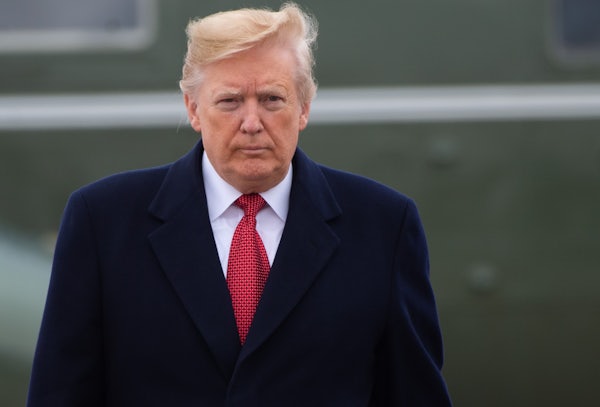 The midterm defeat has left Trump angry and withdrawn.

On Tuesday night The Los Angeles Times and Washington Post published complementary reports, based on interviews with White House officials, indicating that the midterm loss has had a devastating effect on President Donald Trump, leaving the president depressed and often unwilling to perform the basic ceremonial tasks of his job. According to Times, Trump has “retreated into a cocoon of bitterness and resentment.” One White House official told the newspaper Trump is “furious,” adding, “Most staffers are trying to avoid him.”

One consequence of the president’s foul mood is that he’s shirking from meetings, including with foreign dignitaries. As the Times sums up:

Publicly, Trump has been increasingly absent in recent days — except on Twitter. He has canceled travel plans and dispatched Cabinet officials and aides to events in his place — including sending Vice President Mike Pence to Asia for the annual summits there in November that past presidents nearly always attended.

Jordan’s King Abdullah was in Washington on Tuesday and met with Secretary of State Michael R. Pompeo, but not the president.

The Post offers a parallel account, illustrated with a striking story about a conversation with the leader of one of America’s most important allies:

As he jetted to Paris last Friday, President Trump received a congratulatory phone call aboard Air Force One. British Prime Minister Theresa May was calling to celebrate the Republican Party’s wins in the midterm elections — never mind that Democrats seized control of the House — but her appeal to the American president’s vanity was met with an ornery outburst.

Trump berated May for Britain not doing enough, in his assessment, to contain Iran. He questioned her over Brexit and complained about the trade deals he sees as unfair with European countries. May has endured Trump’s churlish temper before, but still her aides were shaken by his especially foul mood, according to U.S. and European officials briefed on the conversation.