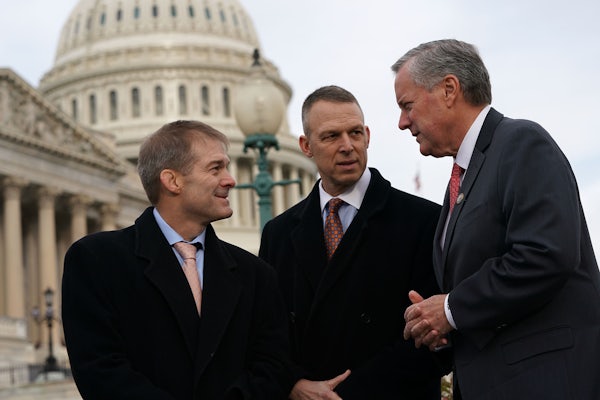 Is the Freedom Caucus dead, or is it just the Republican Party now?

In 50 days, Democrats and Republicans in the House of Representatives will elect their leaders for the upcoming session. Both races appear predictable. Nancy Pelosi is expected to become the first person to hold non-consecutive speakerships in six decades, while Kevin McCarthy is expected to replace retiring fellow Young Gun Paul Ryan.

But Pelosi and McCarthy will have to deal with their left and right flanks, respectively. Pelosi is already being pressured by progressives to take on a host of issues, while McCarthy is facing the same group that has pestered the last two Republican leaders: the Freedom Caucus.

McCarthy likely will have an easier time than Ryan and John Boehner did. Founded in 2014, the Freedom Caucus only ever boasted between 30 and 40 members, but was able to exert an outsized influence when the GOP was in power, because they could deny the party leadership a governing majority. Without that majority next year, the Freedom Caucus’s power is diminished.

At the same time, there has never been less distance between the Freedom Caucus and the median member of the Republican caucus. The midterm elections were a bloodbath for the GOP in general, but particularly for moderate, suburban Republicans. Those who kept their seats tended to be from safely Republican districts, and many who won new seats are fiercely conservative. The Freedom Caucus lost two members, for instance, but is still expected to gain five new members.

The Freedom Caucus lacks leverage, and there is plenty of bad blood between it and McCarthy. But two of its high-profile members, Jim Jordan and chair Mark Meadows, are expected to take on leadership profiles once McCarthy becomes minority leader. Per Politico:

The Freedom Caucus is all but dead at this point, and McCarthy is going to easily put away Jordan in this leadership race. But they are now viewing how McCarthy treats Jordan as a litmus test. The president has put McCarthy in quite a position by asking him to cut a deal with Jordan, and place him at the top of Judiciary. Insiders thought Jordan would’ve been great at Oversight and Government Reform, where Jordan was next in line. Jordan has to jump Reps. Louie Gohmert (R-Texas), Steve Chabot (R-Ohio) and Steve King (R-Iowa) to get to the top of Judiciary—not a huge lift.... There’s a domino effect by putting Jordan at Judiciary: it seems very likely that Mark Meadows (R-N.C.) will make a run for his party’s top slot at Oversight and Government Reform.

Meadows and Jordan are rising in the ranks partly because of the president’s intervention, sure, but also because the party’s hardliners are now in the mainstream. The Freedom Caucus is dead—long live the Freedom Caucus.