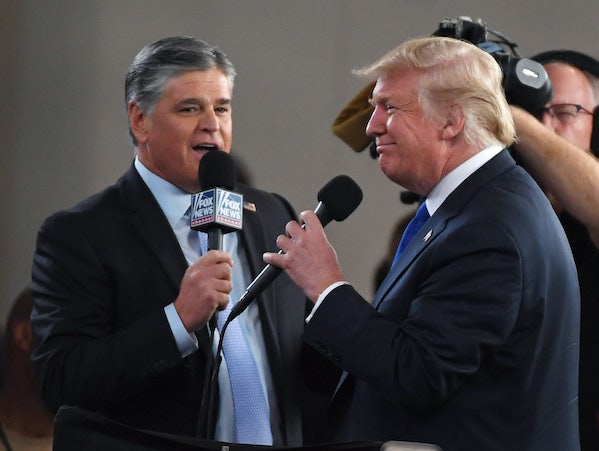 Even Donald Trump is sick of Sean Hannity’s fawning.

Sean Hannity has good claim to be Donald Trump’s number one fan in the media, but the love isn’t always reciprocated. On his Fox News program, Hannity has strained even the lax standards of his network by being an open cheerleader of the president, going so far as to appear in campaign videos. The two men repeatedly share a phone call most weeknights, after Hannity’s show ends. But, a new Daily Beast report indicates that Trump doesn’t fully respect Hannity’s ardent praise.

According to the news site:

Trump has repeatedly—and sometimes for a sustained period of time—made fun of Hannity’s interviewing skills, usually zeroing in on the low-quality laziness of the host’s questions, the three people with direct knowledge tell The Daily Beast.

“It’s like he’s not even trying,” Trump has said, one source recalled, right before the president launched into a rough imitation of Hannity’s voice and mannerisms to complain that the questions about how “great I am” give him nothing to work or have fun with.

The problem might be that Hannity is trying too hard to please Trump, which has rendered his praise worthless. A New York investigation into the Hannity/Trump relationship once noted, “More than most politicians, Trump abides by the Groucho Marx law of fraternization. He inherently distrusts anyone who chooses to work for him, seeking outside affirmation as often as possible from as vast and varied a group as he can muster—but Hannity is at the center.”

But Hannity is no longer an outsider affirmer. He’s firmly a part of Trump’s circle of cronies. Which is another way of saying he’s a ripe target for Trump’s abuse.