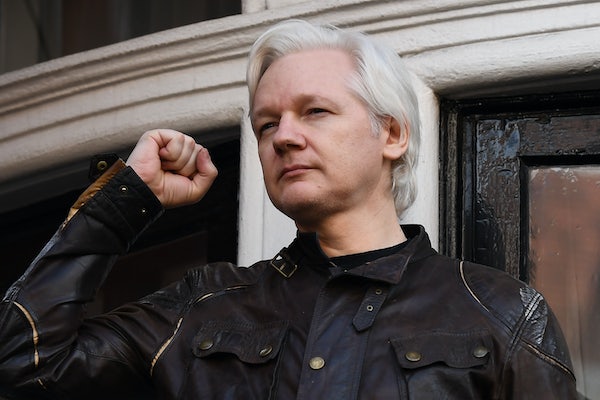 Court filings accidentally reveal that Julian Assange has been charged.

The Washington Post reports that a court filing that failed to properly redact the name of Wikileaks founder Julian Assange makes clear that Wikileaks founder has a sealed charge against him. The revelation came in a filing in the Eastern District of Virginia in an unrelated case involving Seitu Sulayman Kokayi, who was detained because of an alleged interest in terrorism and charged with sexual crimes involving a minor.

The filing, written by Assistant U.S. Attorney Kellen S. Dwyer, who is also assigned to the Wikileaks case, urges that Kokayi’s case be kept under seal: “due to the sophistication of the defendant and the publicity surrounding the case, no other procedure is likely to keep confidential the fact that Assange has been charged.”

Since 2012, Assange has been living in the Ecuadorean embassy in London, originally to avoid arrest for sexual assault charges in Sweden, in a case now closed. He has stayed in the embassy in order to avoid possible arrest and extradition to the United States, a fear validated by the current news.

Wikileaks has a long history of publishing government secrets. Writing in The Intercept, journalist Glenn Greenwald argues that charging Assange would be a threat to press freedom.

“From the Pentagon Papers to the Panama Papers to the Snowden disclosures to publication of Trump’s tax returns to the Iraq and Afghanistan war logs, some of the most important journalism over the last several decades has occurred because it is legal and constitutional to publish secret documents even if the sources of those documents obtained them through illicit or even illegal means,” Greenwald notes.

The Obama DOJ – despite launching notoriously aggressive attacks on press freedoms – recognized this critical principle when it came to WikiLeaks. It spent years exploring whether it could criminally charge Assange and WikiLeaks for publishing classified information. It ultimately decided it would not do so, and could not do so, consistent with the press freedom guarantee of the First Amendment. After all, the Obama DOJ concluded, such a prosecution would pose a severe threat to press freedom because there would be no way to prosecute Assange for publishing classified documents without also prosecuting the New York Times, the Washington Post, the Guardian and others for doing exactly the same thing.