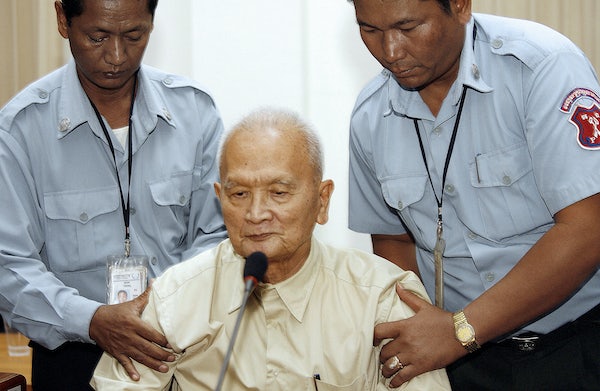 Two of the leading members of the Khmer Rouge regime which terrorized Cambodia from 1975 to 1978 have been found guilty of genocide. The two men are Nuon Chea (the deputy of the late Khmer Rouge dictator Pol Pot) and Khieu Samphan (thehead of state in Pot’s regime). They were charged with acts of genocide aimed at two Cambodian minority groups: ethnic Vietnamese and Cham Muslim. The convictions, which come after a long and arduous trial that was much delayed for political reasons, bring a measure of justice.

But the trial also illustrates the limits of genocide as a category in international law. The extermination of the Vietnamese and Cham Muslims should be seen as genocide and also part of the larger crimes against humanity committed by the Khmer Rouge.

The term genocide was coined in 1944 and codified as a part of international law in 1948 as a response to the crimes of Nazi Germany, notably the extermination of Jews and Roma. As such, it has an uneasy fit for the Khmer Rouge regime, which both targeted ethnic minorities but also had a broader list of class enemies that included intellectuals, the wealthy, city dwellers, and government officials. It’s estimated that between 1.7 and 2.5 million Cambodians died because of Khmer Rouge policies between 1975 and 1979, either through execution or starvation. This was out of a population of roughly 8 million and constitutes one of the greatest crimes against humanity in recorded history. While the term “auto-genocide” is sometimes used to describe Khmer Rouge policy, it has no standing in international law.