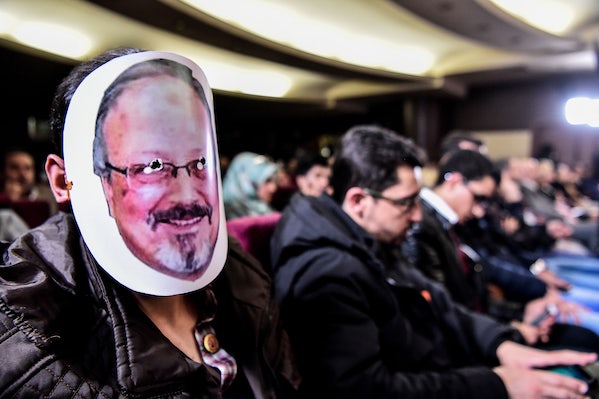 Trump won’t be listening to the Khashoggi tape and is adopting a selective skepticism.

During an interview with Chris Wallace of Fox News which aired on Sunday, the president acknowledged that the United States government has a copy of a recording of the last moments of the life of journalist Jamal Khashoggi. Asked if he had listened to the tape, Trump responded, “We have the tape. I don’t want to hear the tape. No reason for me to hear the tape.” He added that it was a “suffering tape” and “I know everything that went on in the tape without having to hear it . . . . It was very violent, very vicious and terrible.”

Beyond not wanting to listen to the tape, there’s reason to believe that Trump isn’t willing to follow the evidence of the Khashoggi case where it leads. On Friday, The Washington Post reported that the CIA had concluded that the evidence points with a high degree of confidence to Khashoggi being murdered at the order of the Saudi Crown Prince, Mohammed bin Salman.

In his Fox interview, Trump emphasized that bin Salman repeatedly denied involvement in the killing. “Well, will anybody really know?” Trump, said, when asked whether bin Salman could be lying. “You saw we put on very heavy sanctions, massive sanctions on a large group of people from Saudi Arabia. But, at the same time, we do have an ally, and I want to stick with an ally that in many ways has been very good.”

By asking whether “will anybody really know” Trump offered a characteristic rhetorical move of selective or opportunistic epistemological skepticism. When Trump doesn’t want the truth of a matter known, he starts talking like a philosopher who doubts whether anything can be known. An earlier example of this occurred in October when asked whether there was any proof of his claim there were Middle Easterners on the caravan of asylum seekers in Mexico. “There’s no proof of anything,” Trump replied.