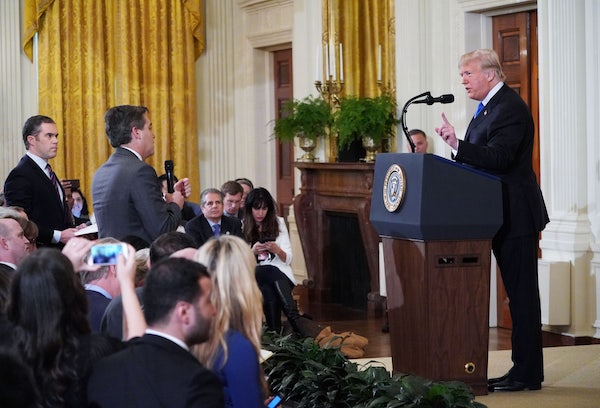 Breaking with tradition, the The White House Correspondents’ Association (WHCA) will not hire a comedian to host their next annual dinner, but instead will use the services of historian Ron Chernow. Known for his best-selling biographies of Alexander Hamilton (which inspired a popular musical) and Ulysses S. Grant, Chernow will speak about the importance of the First Amendment. The shift away from comedy is emblematic of the fraught relationship between the WHCA and the Trump White House. Last year, the president didn’t attend the WHCA dinner and comedian Michelle Wolf’s satirical routine was attacked by many of the president’s partisan supporters.

As the WHCA changes the tone of the dinner, the White House seems to be gearing up for another battle against CNN correspondent Jim Acosta. After a court order forcing the White House to return Acosta’s press pass, the White House is giving signs that they will only do so temporarily and are looking for another occasion to revoke it, which would ignite a wider conflict not just with CNN but also the WHCA.

On Friday, White House Press Secretary Sarah Sanders was interviewed on Fox News by Mike Huckabee (her father). Sanders said, ““[T]radition has been in the past that the White House Correspondents’ Association determines who sits in [the press] room and who sits in those individual seats.” Huckabee noted, “But that’s tradition. It’s not law.” Sanders replied, “True.”

The implication of the exchange is that the White House could try to change the tradition of having the WHCA decide who sits in press conferences. On Sunday, President Donald Trump said about Acosta in a Fox News interview that, “If he misbehaves, we’ll throw him out or we’ll stop the news conference.”

The White House clearly sees a political advantage in stirring up strife with the press.