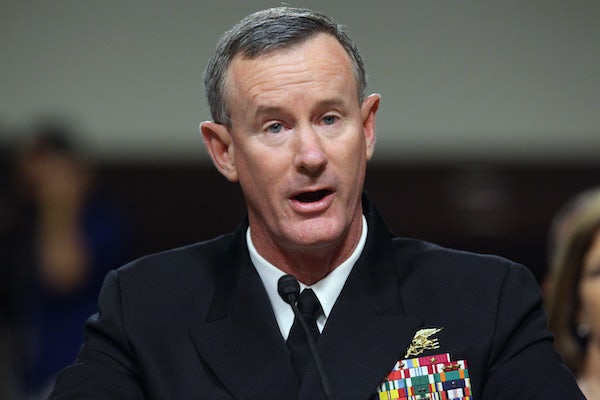 Donald Trump doesn’t actually seem all that keen on the military.

President Donald Trump’s bizarre decision to deride retired Admiral William McRaven on Sunday is symptomatic of a wider rift between the commander in chief and the military he oversees.

Last year, McRaven said that the “president’s attack on the media is the greatest threat to our democracy in my lifetime.” Asked about these comments, Trump, in a Fox News interview that aired Sunday, inaccurately dismissed McRaven as a “Hillary Clinton fan” and “Obama backer.”

The president also disparaged McRaven’s most famous achievement, commanding the raid that led to the killing of Osama bin Laden.  “Wouldn’t it have been nice if we got Osama bin Laden a lot sooner than that, wouldn’t it have been nice?” Trump asked. “You know, living—think of this—living in Pakistan, beautifully in Pakistan, in what I guess they considered a nice mansion, I don’t know, I’ve seen nicer. But living in Pakistan right next to the military academy, everybody in Pakistan knew he was there.”

The Navy SEAL who pulled the trigger responded to Trump’s words with a tweet:

As The Washington Post notes, the tussle with McRaven raises “broader questions about Trump’s relationship with military matters.” The president has been widely criticized for not attending an armistice ceremony in France and a Veterans Day ceremony at Arlington National Cemetery.  He has also failed to visit soldiers fighting in the Middle East. He’s criticized his Secretary of Defense Jim Mattis as “sort of a Democrat.” The Post does note that Trump has earned some appreciation from the military thanks to his increases in the budget. But even that might end soon, since rising deficits are causing the administration to recalibrate the budget. The five percent cut Trump has ordered in the budget will mean $33 billion less for the Pentagon.