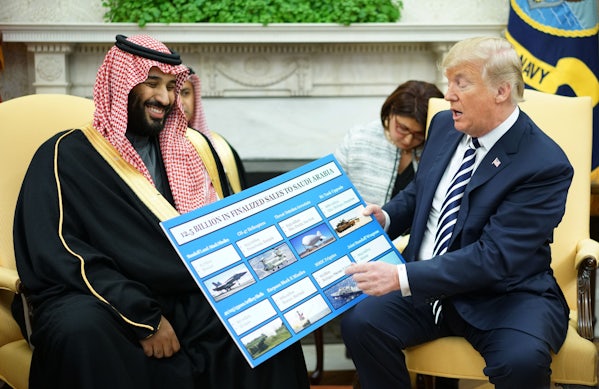 On Tuesday, the president of the United States issued a statement, rife with exclamation marks, explaining why he was standing with Saudi Arabia despite the killing of journalist Jamal Khashoggi, an American permanent resident. In the key passage of the statement, Trump expressed uncertainty on the key question: the culpability of Saudi leaders in the assassination.

In fact, the CIA has leaked their conclusion that they are certain with a high degree of confidence that bin Salman ordered Khashoggi’s murder.

Aside from the comment indicating uncertainty, Trump also repeated smears against the late journalist (“Representatives of Saudi Arabia say that Jamal Khashoggi was an ‘enemy of the state’ and a member of the Muslim Brotherhood”), while appending provisos. (“My decision is in no way based on that—this is an unacceptable and horrible crime.”) Trump also repeated the falsehood that Saudi Arabia has “agreed to spend and invest $450 billion in the United States,” creating “hundreds of thousands of jobs.”

As former CIA director John Brennan noted, Trump’s remarks mean that any accountability in the Khashoggi case will have to come from Congress.