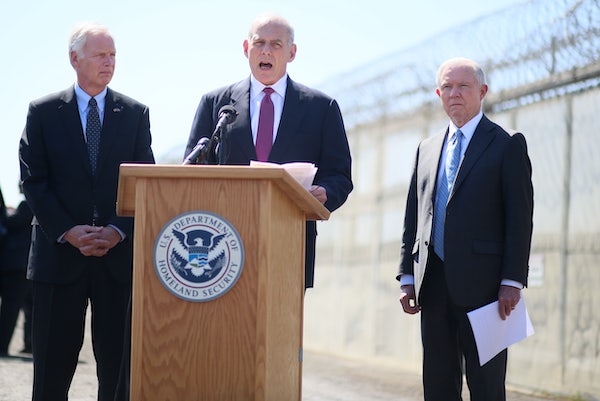 John Kelly signs an order allowing American troops to use lethal force at the border.

The Military Times is reporting that Kelly, the White House chief of staff, has signed a memo that authorizing the American military to “perform those military protective activities that the Secretary of Defense determines are reasonably necessary” in the service of defending border agents. The memo, described as a “Cabinet order,” defines these activities to include “a show or use of force (including lethal force, where necessary), crowd control, temporary detention. and cursory search.”

It’s unclear why this authorization came from the desk of Kelly, rather than the president. Further, as the Military Times notes, the order might run afoul of the Posse Comitatus Act of 1878, which restricts the use of the military for domestic purposes.

As The Military Times notes, the new order is in keeping with the innovative use of the military for border control under the Trump administration. “Military forces always have the inherent right to self defense, but defense of the border agents on U.S. soil is new,” the newspaper points out. “In addition, troops have been given additional authorities in previous years to assist border agents with drug interdictions, but the widespread authorization of use of force for thousands of active-duty troops is unique to this deployment.”

In early November, President Donald Trump seemed to suggest that lethal force would be an appropriate response to migrants who threw rocks at American personnel. “I told them, ‘consider that a rifle,’” Trump told reporters. “When they throw rocks like they did at the Mexico military and police, I say ‘consider it a rifle.’” The president later backtracked, after the comments were criticized by retired military officers.