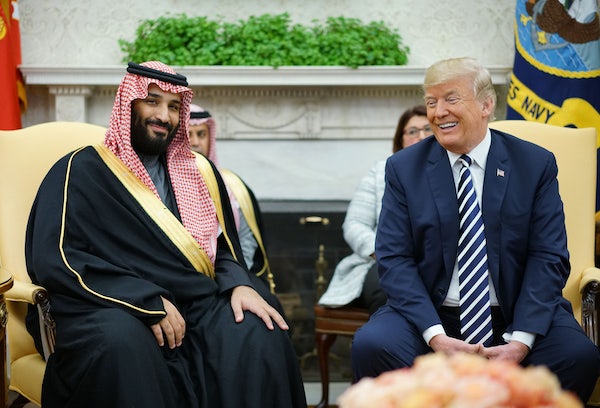 On Thursday, The New York Times published an op-ed headlined, “Trump is crude. But he’s right about Saudi Arabia.” Written by Michael Doran, a senior fellow at the Hudson Institute and  Tony Badran, a research fellow at the Foundation for Defense of Democracies, the op-ed  offered a full throttle defense not just of Saudi Arabia but also, specifically, of Crown Prince Mohammed bin Salman, whom the CIA believes ordered the assassination of journalist Jamal Khashoggi.

In a crucial paragraph, Doran and Badran argue that bin Salman is the legitimate ruler of Saudi Arabia:

Let’s imagine Mr. Trump’s critics get their wish. A replacement crown prince who rose to power under pressure of sanctions would be severely weakened, if not entirely illegitimate.

It might seem curious that someone from “the Foundation for Defense of Democracies” would support a hereditary monarch ruling over one of the most authoritarian regimes on earth. But this paradox is perhaps explained by the fact that both Doran and Bardran work for think tanks that have deep ties to Arab autocracies.

As The New York Times reported in May, Saudi Arabia and the United Arab Emirates (UAE) have been using American think tanks as part of an extensive lobbying effort to shore up their support in America. Two key figures in this effort are George Nader, an advisor to the ruler of the UAE and Elliott Broidy, a major Republican donor and former deputy chairman of the Republican National Committee.

Both the Hudson Institute and the Foundation for Defense of Democracies claim they reject any foreign funding. But as the Times reporting makes clear, Nader was able to use Broidy as a front-man for helping to fund the two think tanks in projects supporting Saudi and UAE policies:

Mr. Nader did, however, provide a $2.7 million payment to Mr. Broidy for “consulting, marketing and other advisory services rendered,” apparently to help pay for the cost of conferences at two Washington think tanks, the Hudson Institute and the Foundation for Defense of Democracies, that featured heavy criticism of Qatar and the Muslim Brotherhood.

Nader and Broidy are dubious characters on other grounds as well. Nader has served time in prison for sexually abusing children and has also been convicted of possessing child pornography. Nader is currently a co-operating witness in special counsel Robert Mueller’s investigation. In 2017, Broidy agreed to pay $1.6 million in hush money to a woman he had an affair with in a deal arranged by President Donald Trump’s former lawyer Michael Cohen.*

This publication of this op-ed mars the reputation of everyone involved. The Hudson Institute and the Foundation for Defense of Democracies seem more than ever to be mouthpieces for Arab autocrats. But The New York Times itself is also tainted by publishing this op-ed. After all, their own reporting provides ample evidence for why these two think tanks should not be taken seriously. Yet the newspaper did nothing to inform readers of the op-ed about the very salient connections between these think tanks and the Arab monarchies.

*This article has been corrected to reflect that $1.6 million was the agreed upon settlement sum in 2017, but may not reflect the amount that has been paid at this point.