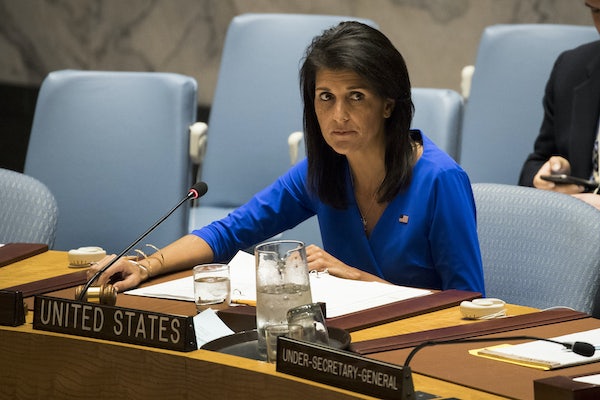 On Sunday, Russian naval forces repeatedly clashed with Ukrainian ships, resulting in a Ukrainian tugboat being rammed by a Russian coast guard vessel, three other Ukrainian ships being stalled, and traffic between the Kersh Strait getting blocked. The American response to these Russian actions has been incoherent.

Outgoing United Nations ambassador Nikki Haley has taken the most hawkish line. At an emergency meeting of the UN Security Council on Monday, Haley denounced the Russian acts as an “outrageous violation of sovereign Ukrainian territory” and “another reckless Russian escalation.”

Haley claimed to be speaking for the administration but the White House has, to date, been very quiet about the situation. Instead, President Donald Trump took Sunday to complain about NATO, the alliance system that is tasked with standing up to Russian aggression:

Further, as Tom Wright of the Brookings Institution noted, the United States’ ambassador to Germany, Richard Grenell, was sending out tweets berating the German government:

There’s a real danger that mixed signals from the United States could cause the current situation to escalate, with Russian President Vladimir Putin taking these contradictory words as a green light for more aggression.

Trump and Putin are scheduled to meet soon at the G20 Summit in Argentina.