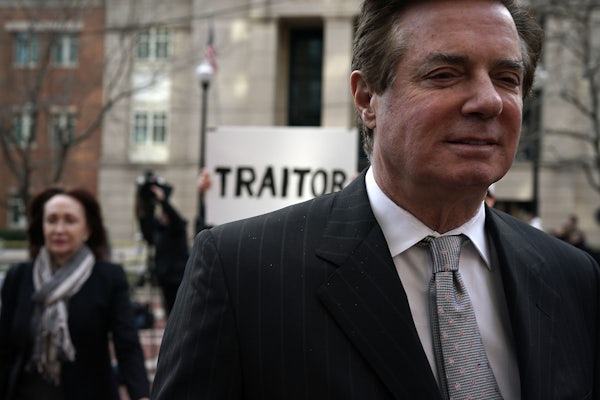 The Guardian is reporting that Paul Manafort, the former head of the Trump campaign, made at least three visits from 2013 to 2016 to the Ecuadorian embassy in London to meet with Wikileaks founder Julian Assange. If true, the report offers important substantiation for the allegations that the Trump campaign colluded with the Russian government during the 2016 campaign, with Wikileaks serving as the venue for the release of hacked information that damaged the Clinton campaign.

In the key part of the report, The Guardian asserts:

Sources have said Manafort went to see Assange in 2013, 2015 and in spring 2016 – during the period when he was made a key figure in Trump’s push for the White House.

It is unclear why Manafort wanted to see Assange and what was discussed. But the last meeting is likely to come under scrutiny and could interest Robert Mueller, the special prosecutor who is investigating alleged collusion between the Trump campaign and Russia.

A well-placed source has told the Guardian that Manafort went to see Assange around March 2016. Months later WikiLeaks released a stash of Democratic emails stolen by Russian intelligence officers.

The report also offers these further details of the alleged meetings:

A separate internal document written by Ecuador’s Senain intelligence agency and seen by the Guardian lists “Paul Manaford [sic]” as one of several well-known guests. It also mentions “Russians”.

According to two sources, Manafort returned to the embassy in 2015. He paid another visit in spring 2016, turning up alone, around the time Trump named him as his convention manager. The visit is tentatively dated to March.

In the past, Manafort has denied any connection with the hacking. Manafort’s lawyers declined a request by The Guardian to comment. On Tuesday morning, Wikileaks tweeted:

There are genuine grounds to be cautious about the report. It is based on anonymous sources, some of whom are connected with Ecuadorian intelligence. The logs of the embassy show no such meetings. The information about the most newsworthy meeting (in the spring of 2016) is vaguely worded, suggesting a lack of certitude.

UPDATE: post has been corrected to make clear Manafort’s lawyers have declined to comment on the story.

UPDATE II: After the publication of this post, Manafort issued a statement denying ever meeting with Assange: “I have never met Julian Assange or anyone connected to him. I have never been contacted by anyone connected to Wikileaks, either directly or indirectly. I have never reached out to Assange or Wikileaks on any matter. We are considering all legal options against the Guardian who proceeded with this story even after being notified by my representatives that it was false.”