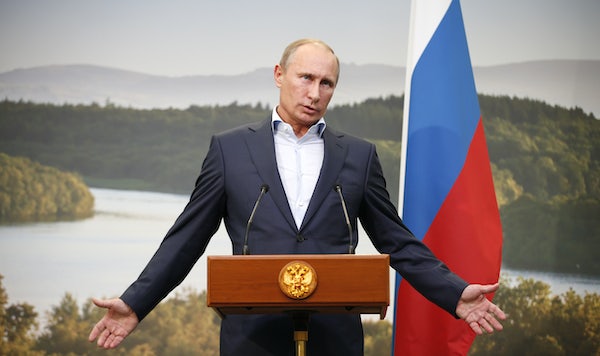 Russian President Vladimir Putin is blaming the ongoing diplomatic crisis with neighbouring Ukraine on his Ukrainian counterpart Petro Poroshenko. The dispute is over naval passage through the shared Kerch Strait. Russian coast guard vessels  rammed into a Ukrainian tugboat, seized three Ukrainian ships, and restricted travel through the strait earlier this week. In response, Poroshenko’s government declared martial law in ten border regions. The Ukrainian president also warned that his nation was under the threat of a full-scale war with Russia.

Speaking at an investment forum, Putin linked the quarrel to upcoming elections in Ukraine, where Poroshenko is trailing in the polls. “It is undoubtedly a provocation and, I think, the incumbent president in the run-up to the Ukrainian presidential election in March 2019,” Putin said. The Russian president added, “He had to do something to make the situation more tense.”

Putin argued that the “political froth” would end after Russia placed a new S-400 surface-to-air missile system in Crimea to join existing forces. Russia already has three such missile systems in place.

American president Donald Trump warned that Russia’s actions could lead him to cancel his planned meeting with Putin later this week in Argentina for the G-20 summit.

“Maybe I won’t even have the meeting,” Trump said. “I don’t like that aggression. I don’t want that aggression at all.” This was an unusual rebuke from one of the world figures least inclined to criticize Putin.