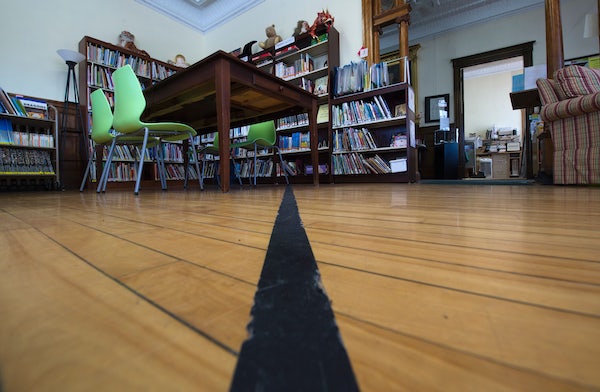 A library straddling the Canadian border has become a haven from Trump’s travel ban.

Reuters has published a remarkable story about how Iranian families kept apart by the travel ban are using the Haskell Free Library and Opera House, which occupies a liminal space between Derby Line, Vermont, and Stanstead, Quebec. Iranians residents inside the United States are often reluctant to leave the United States to meet family members because they are afraid they will not be admitted due to the travel ban imposed by the Trump administration on seven predominately Muslim countries. Conversely, their family members are uncertain whether they will be admitted even as visitors. But a small cohort of Iranians are using the library as a neutral meeting ground.

American and Canadian border authorities are aware of the library and have wavering attitudes toward it. Sometimes meetings are allowed, sometimes they threaten the library with closure.

The uncertainty of the situation is captured in one family reunion described by Reuters:

Mahsa Izadmehr, an Iranian doctoral student in engineering at the University of Illinois-Chicago, had gone seven years without seeing her younger sister, who lives in Switzerland. In late September, they met at the library.

But as they approached each other at the border, demarcated outside the library by a line of flower pots, a U.S. Border Patrol agent quickly got out of a car parked close by.

“He said, ‘It’s been about a month that we’ve closed this; we don’t allow anyone to meet here,’” Izadmehr said. “I asked him, ‘Can you at least give me permission to hug my sister?’”

The agent allowed them to embrace but barred them from exchanging the gifts they had brought – dresses, Swiss chocolates and a watch – and kept a close eye on them as they talked from opposite sides of the flower pots.

The sisters finally entered the library when a staff member offered them a tour, but Border Patrol agents later chastised the staff member, said Izadmehr, who witnessed the exchange.