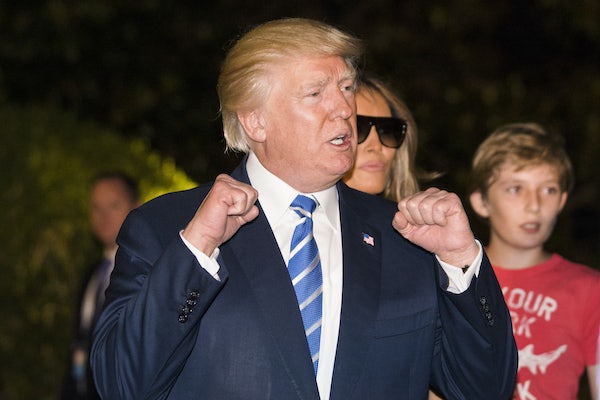 Are insecure men more likely to vote for Trump?

Writing in The Washington Post, psychologist Eric Knowles and New York University graduate student Sarah DiMuccio present research they claim shows a connection between fragile masculinity and support for Donald Trump. The research was based on correlating the political map with Googled topics such as “erectile dysfunction,” “hair loss,” “steroids,” “penis enlargement,” “penis size,”  “testosterone” “how to get girls,” and “Viagra.”

Knowles and DiMuccio report that there was a definite correlation:

We found that support for Trump in the 2016 election was higher in areas that had more searches for topics such as “erectile dysfunction.” Moreover, this relationship persisted after accounting for demographic attributes in media markets, such as education levels and racial composition, as well as searches for topics unrelated to fragile masculinity, such as “breast augmentation” and “menopause.”

They further note that this correlation between fragile masculinity and voting Republican didn’t exist in recent previous presidential and congressional elections but did continue in the 2018 midterms.

The research doesn’t explain the wide swath of voters who were not male who voted for Trump. While Trump lost the female vote overall, he won among white women by 53 percent, suggesting race may also be a strong factor.

As Knowles and DiMuccio acknowledge, other cautionary notes are in order. “First, the research reported here is correlational,” they write. “We can’t be entirely sure that fragile masculinity is causing people to vote in a certain way.”

Correlation and causation are, of course, two very different things: In cases where two trends are correlated, for example, a third trend may in fact be causing both—the correlation in this case would have nothing to do with causation. So it’s possible that other factors are at work when it comes to Trumpism, although Knowles and DiMuccio say they controlled for “demographic attributes.”

It’s unclear in the published article whether they controlled for age, which Jesse Singal, a contributing writer to New York magazine raises as a possible factor. Singal, who is working on a book about shoddy but intuitively appealing social science, notes that terms like erectile dysfunction, hair loss, testosterone and Viagra could easily correlate with age. Previous surveys have shown Trump voters are more likely to be older.

“Is a search for ‘erectile dysfunction’ or ‘Viagra’ more predictive of a high score on a fragile masculinity measure than of being middle-aged or older rather than, say, under 35?” Singal asked in an email.

Singal has written to Knowles to see if they accounted for age. “Yes, in all analyses we controlled for the over-45 percentage of region—as well as for the ethnic breakdown, percentage of males, percentage with an undergraduate degree, unemployment rate, median income, and a dummy variable indicating whether the region is in the South or not (this is popular among political scientists),” Knowles responded.

UPDATE: this article has been updated to include Knowles response to Jesse Singal’s query.